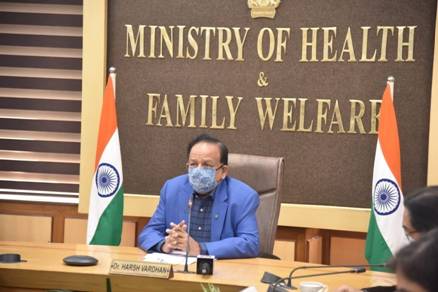 The senior officials of the Ministry apprised the Minister on various improvements that have been made to make tomorrow’s Pan-India dry-run glitch-free such as number of telephone operators has been increased to answer every possible query from the teams on ground conducting the dry-run; block-level task forces have been constituted for physical inspection of the sites; all workers have been oriented for the purpose with the dissemination of FAQs on the process, among other issues.

Requesting every official to ensure that the vaccination sites and official incharge abide by the detailed checklist and SOP for vaccination that has been prepared by the Union Health Ministry and shared with the States/UTs to guide them in the dry run, Dr. Harsh Vardhan pressed the need for perfect calibration between the administrative and medical officers to make the event a primer that would later enable the mass implementation of vaccination drive.

Re-emphasizing the importance of such an event that involves mass participation similar to the elections, he said, “Let us attempt to implement it as a real exercise with attention to the minutest detail. Proper co-ordination will go a long way in building mutual understanding so that the upcoming vaccination drive may proceed without any glitch.”

Drawing from the Pulse Polio drive of 1994 in Delhi, Dr Harsh Vardhan stated that as the exercise of vaccination is so integrally based on interaction and involvement of people, the relevant stakeholders, NGOs, Civil Society Organization (CSOs) and others need to be mobilised.He also stressed on the need for adequate security arrangements at session sites, cold chain points and during vaccine transportation.

They expressed confidence in their preparedness regarding the mock drill and assured the Union Minister that they are in all preparedness for the actual exercise of vaccination of the identified beneficiaries.

Dr. Vardhan also updated the officers on the status of the two leading vaccine candidates whose data are being closely monitored by the Subject Expert Committee of DCGI. He appreciated the efforts of front-line workers and expressed his condolence for those Corona warriors who sacrificed their lives in an attempt to save others.