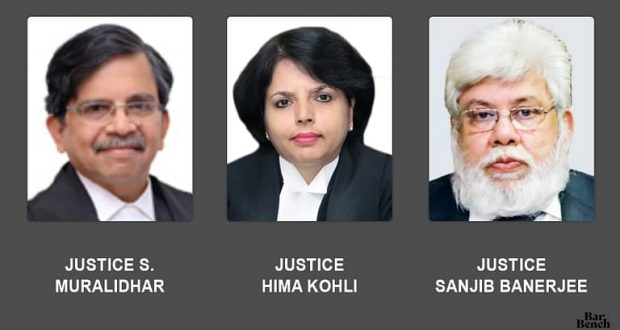 Newdelhi:31/12/20:The President of India, in exercise of the power conferred by clause (1) of Article 217 of the Constitution of India, appointed the following Judges as Chief Justices of the High Courts :

The brief profile of Judges:

Dr. Justice S. Muralidhar, B.Sc., LL.M., Ph.D., was born on August 08, 1961. He enrolled as an Advocate on September 12, 1984, and practiced in Civil Courts in Chennai, later in Delhi High Court and Supreme Court of India in Civil, Criminal, Constitutional, Labour, Election, Arbitration, Public Interest Litigation, Human Rights, Company, Taxation and Service matters. His fields of specialization are Constitutional, Election, PIL, Criminal, and Human Rights Cases. He worked as Counsel for Election Commission of India, National Human Rights Commission, Central Vigilance Commission, and University Grants Commission and as Member of Supreme Court Legal Services Committee from 2000-2004. He was appointed as an Additional Judge of Delhi High Court on May 29, 2006, and as Permanent Judge on August 29, 2007. He was transferred to Punjab and Haryana High Court on 06th March 2020.

enrolled as an Advocate on September 20, 1984. She practiced in the Delhi High Court in Civil, Constitutional, Labour, Company and Service matters. Her field of specialization was Civil. She was appointed as an Additional Judge of the Delhi High Court on May 29, 2006 and as Permanent Judge on August 29, 2007.

Shri Justice Pankaj Mithal, B. Com., LL.B., was born on June 17, 1961. He was enrolled as an Advocate on September 22, 1985. He practiced in the Allahabad High Court in Civil, Constitutional, Labour and Service matters for 20 years. His field of specialization is Land Acquisition, Rent Control, and Education matters. He was appointed as an Additional Judge of the Allahabad High Court on July 07, 2006, and as Permanent Judge on July 2, 2008.

was enrolled as an Advocate on November 21, 1990 and practiced at the Supreme Court and High Court of Calcutta and other High Courts in Civil, Company, Arbitration and Constitutional matters and has specialized in Company, Intellectual Property, and Arbitration Laws. He was appointed as Permanent Judge of the Calcutta High Court on June 22, 2006.

2020-12-31
Editor in chief
Previous: Union Education Minister announces the dates of CBSE Board examinations- 2021
Next: Odisha government will spend Rs 3,500 crore to transform SCB into a world-class healthcare institution