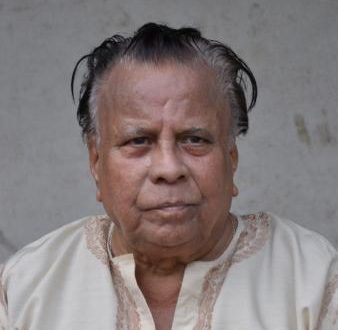 Shantanu Mohapatra was born on November 1936, in Baripada in Mayurbhanj district. He received B.Sc in Applied Geology and Geophysics in 1957 from the Indian Institute of Technology, Kharagpur. He joined the State Directorate of Mining and Geology Government of Odisha in June 1957 as a Geologist from which he later retired as the Director (Mining & Geology) in 1994. A born singer, Mr. Mohapatra learned vocal music from Sangeet Narayan Banchhanidhi Panda from the age of five years and was ready for public performances at the tender age of nine years. Shantanu Mohapatra is a multi-faceted personality who has shown his talent both as a singer and music director. This veteran  music director passed away on 30th, December 2020

Shantanu Mohapatra formulated new regulations on gemstones, anti-smuggling & trading of minerals, new Act & Rules on licensing and storage, trading, etc. of coal. During his tenure as Director, mineral production and mining revenue of the state touched an all-time high of 39 million tonnes and Rs 115 Crores respectively.

Shantanu Mohapatra was the Director, Llyods Metals & Engineers, is on the Board of Directors, Ispat Alloys, Kolkata, Advisor to NIPL (Neelachal Iron & Power Ltd.), Jamshedpur. He was also a consultant to JINDAL Stainless Steel, Bhubaneswar, and M/s Orion Ispat Ltd

Shantanu Mohapatra joined the IPTA (Indian People’s Theatrical Association) while still at IIT, Kharagpur, and learned the art and technique of Choral singing under the famous poet-singer-composer, Salil Choudhury.

The career of Shantanu Mohapatra with Music:-

A born singer, Mr. Mohapatra learned vocal music from Sangeet Narayan Banchhanidhi Panda from the age of five years and was ready for public performances at the tender age of nine years. He started early, creating a storm when he was recognized as a child prodigy after receiving the Best Singer Trophy for 4 consecutive years (singing Dhrupad, Khayal, Odissi, Champu, and Bhajan) in the Annual All Orissa Music Competitions organized by ‘Utkala Sangeeta Samaaja, Cuttack.’

It was in his graduation years in Kolkata when he met Salil Choudhury & was greatly impressed with his style of music & incorporated the ‘jumping notes’ style in his Odia compositions.

Shantanu Mohapatra also has the unique distinction of being the first to get the Hindi film greats like Lata Mangeskar (Surjyamukhi), Mohd Rafi (Arundhati), Manna Dey (surjyamukhi), Usha Mangeskar (Arundhati) & experimented with other artists like Suresh Wadekar, Anuradha Paudwal, Usha Uthup, Kavita Krishnamurthy & others with his Mumbai style orchestra music & choral songs which were quite unknown during that era of Odia music.

Shantanu Mohapatra debuted as an Odia movie music composer in 1963 with Surjyamukhi & went on to compose for 5o odd movies, features, telefilms, documentaries & especially art movies creating milestones in his 60 years of a musical journey. Among his films, there were national award-winning films like Shodh by Biplab Roy Choudhury (first Hindi movie produced from Odisha)& Bagh Bahadur by Buddhadeb Das Gupta.

Shantanu Mohapatra has around 1900+ compositions, both film & non-film, to his credit among which there are 53 films (feature & tele),10 Jatras & 60 dramas by AIR (Cuttack) & 10 dance dramas. He has also won the highest number of awards & accolades as a music director in Odisha, totaling over 80.

Music Director(Name of the film)