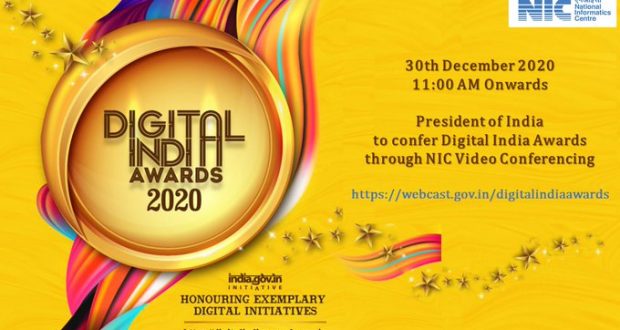 in National December 29, 2020 Comments Off on President Ram Nath Kovind to Confer the Digital India Awards 2020 on 30th December 380 Views

Newdelhi:29/12/20; President of India Shri Ram Nath Kovind will virtually confer the Digital India Awards 2020 on 30th December 2020 at 11:00 AM via video conferencing. In line with Digital India’s vision, this is the first time that the entire process of the Digital India Awards is being conducted online from nominations to screening to the final awards ceremony. National Informatics Centre (NIC) under the Ministry of Electronics & Information Technology (MeitY) has been conducting the biennial Digital India Awards (DIA) to promote innovation in eGovernance and digital transformation of government service delivery mechanism.

The event will commence on 30 December 2020 at 11:00 AM.  The event will be telecasted live on Doordarshan and will also live-streamed on NIC Social media  platforms:

The 6th Digital India Awards 2020 have been announced under the following six categories:

In addition to above six categories, Jury Choice Award will be conferred to honour excellence in design and implementation of National Public Digital Platform.

In order to initiate and steer the activities for the Digital India Awards 2020, a high level Jury under the Chairmanship of Secretary, MeitY with representation from government, industry and academia was constituted.