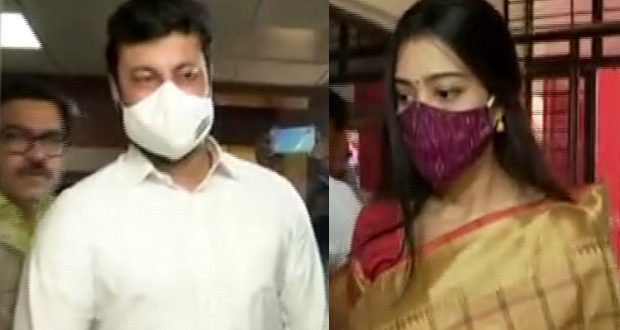 Cuttack:29/12/30 BJD MP Anubhav Mohanty and his wife Varsha Priyadarshini appeared before the Odisha State Commission for Women (OSCW) on Tuesday in connection with a marital discord case. Though the Commission has issued summon notice to the BJD MP along with her parents, only the parliamentarian deposed before it today. He was supposed to appear before the commission at 11 is today, but he reportedly missed the deadline and reached the office about 2.30 hours later. Mohanty’s actress wife Varsha Priyadarshini also reached the State Commission’s office in the morning to submit her response.

According to sources, the SCW had asked the couple to sit in a single room and questioned them in connection with the domestic violence allegations brought by the actress.

On December 15, Varsha had moved Odisha State Commission for Women over her ongoing marital discord.

Recently, the Purighat police had registered a case against Mohanty on the basis of the domestic violence and torture complaint lodged by his wife.

As per reports, a case was registered under section 498 (A), 506, and 341of IPC against Mohanty and two of his associates.