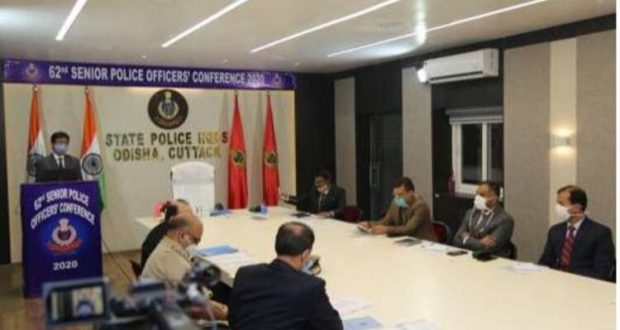 in State News December 27, 2020 Comments Off on Odisha DGP stressed on priority on women and children victims and professional crime investigation 260 Views

Cuttack:27/12/20; Odisha DGP Abhay today stressed on priority on women and children victims and professional crime investigation. During his address at the 62nd Senior Police Officers’ Conference 2020 of Odisha Police held in virtual mode, the DGP emphasised on continuous assessment of police leadership, prompt response to social media, capacity building for cybercrime investigation, adoption and integration of new technology for improving delivery system among others. Abhay officially inaugurated the event at State Police Headquarters in Cuttack.

More than one hundred Senior Police Officers from different police establishments including District SPs and Commandants of Battalions participated in the conference.

Detailed discussions on LWE scenario in the State were held by Director Intelligence, IGP Operation, DIG SIW as well as SPs of Malkangiri, Kandhamal, and Kalahandi and strategies planned for future.
During 2020, the neutralization of 17 Maoist leaders and cadres, arrest of 34 Maoists, and surrender of 21 Maoists were some of the major achievements of the Odisha Police.

The establishment of three COBs at Hantalguda, Jodambo, and Gurasetu and operationalization of Jodambo PS from Jodambo brought about 80% of Swabhiman Anchal under police cover.

Review of Crime Scenario was carried out ADG, CID, CB followed by presentations on detection of food adulteration by DCP, Cuttack, combating illegal activities in mining and coal industry by SP Keonjhar and SP Angul.

SP Koraput and SP Nabarangpur also spoke on the detection and seizure of ganja and financial investigation on narcotic cases. During the year, more than 1200 quintals of ganja were seized, over 18000 acres of illegal cultivation of cannabis destroyed and 34 kg of brown sugar seized which was a record detection by Odisha Police.

There were also presentations on the ‘Use of Forensics and Technical Aids’ for improvement of quality investigation and discussions on 5T policing in the State.