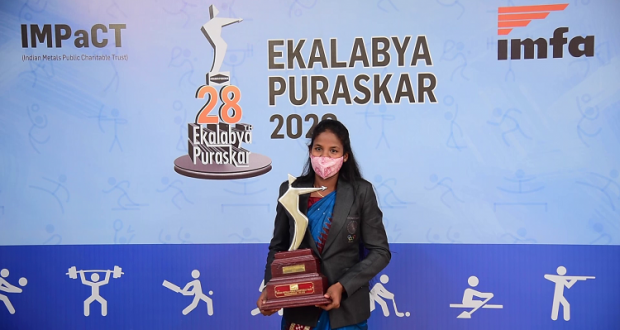 Bhubaneswar:27/12/20: International Odia Hockey player Namita Toppo was on Sunday honoured with the 28th prestigious Ekalabya Puraskar for the year 2020 for her outstanding performance at the national and international level.

She received a cash award of Rs. 5 lakh along with a citation at a low key ceremony held here in strict adherence to Covid-19 guidelines.

On the basis of the remarkable performance by the ace hockey player between April 1, 2018, and March 31, 2020, the Ekalabya Award committee comprising jury members drawn from different walks of life had unanimously selected her for the coveted honour. 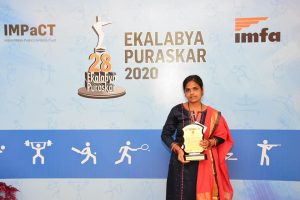 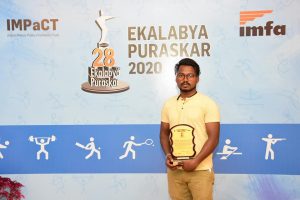 Besides Namita, two other sportspersons-weightlifter Sneha Soren and International Badminton player Rutaparna Panda were also felicitated with a cash cheque of Rs 50,000 each for their exceptional contribution to the field of sports.

Through a virtual route, Baijayant Panda, former MP (Lok Sabha) and Trustee of IMPaCT greeted the awardees and wished them great success in their respective fields. Panda said that IMPaCT has been in continuous pursuit to recognize and foster excellence in sports.

Instituted in 1993, Ekalabya Award has emerged as one of the most prestigious honours at par with any other sports award at national level.

It is observed from the analysis, that the award has helped boost the self-confidence of the sportspersons, a released issued by IMPaCT, the charitable wing of Indian Metals & Ferro Alloys (IMFA) stated.

2020-12-27
Editor in chief
Previous: Ministry of Tourism’s Dekho Apna Desh Webinar on “Secrets and Delights of Indian Cuisine”
Next: Odisha DGP stressed on priority on women and children victims and professional crime investigation