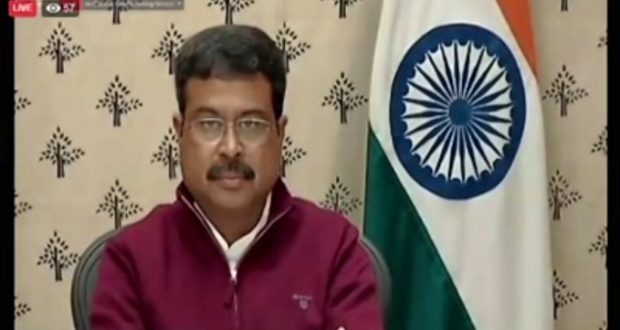 India is most committed to environmental and climate causes:Dharmendra Pradhan

in National December 23, 2020 Comments Off on India is most committed to environmental and climate causes:Dharmendra Pradhan 217 Views

New Delhi;23/12/20; Union Minister of Petroleum and Natural Gas & Steel Shri Dharmendra Pradhan today interacted with Stanford Alumni Group on “The Future of Energy in India.”Shri Pradhan said that India’s developmental stage engenders a rapid expansion of energy consumption and a need for robust energy security. India is currently using only 6% of the world’s primary energy while the per capita consumption of energy is still one-third of the global average. This, however, is rapidly changing. Recently released reports of many international platforms and agencies have estimated that the world’s total primary energy demand would increase at less than 1% per annum till 2040. On the other hand, India’s energy demand would grow at about 3% per annum till 2040. Oil demand would plateau around 2030 for the world while the same would happen for India in 2035. Natural gas would increase its share in the world energy mix replacing oil and coal. This energy growth would be mainly supported by India and other countries in Asia, he added.

The Minister said that Prime Minister Shri Narendra Modi has clearly envisaged the measures for a cleaner, greener, and more inclusive future for India. In this context, he said “We are accelerating our efforts to move towards a gas-based economy. We are moving rapidly towards the cleaner use of fossil fuels, particularly petroleum and coal. Greater reliance is on domestic sources to drive biofuels. We are working towards achieving the renewables target of 450 GW by 2030, Increasing the contribution of electricity to de-carbonize mobility, Moving into the emerging fuels, including hydrogen, and emphasising on digital innovation across energy systems.”

Speaking about energy security strategy, the Minister said that we have achieved the milestone of completely filling all the Strategic Petroleum Reserves this year with a total capacity of 5.33 MMT constructed at Visakhapatnam, Mangalore, and Padur. “We have initiated the process of establishing another 6.5 MMT commercial-cum-strategic petroleum storage facilities at two locations at Chandikol and Padur under the Public-Private Partnership model.”

Shri Pradhan said that Indian energy companies have developed a more strategic mindset by deploying the latest technologies encompassed under Industrial Revolution 4.0. This new age of Industrialization offers great opportunities for the energy sector to exponentially improve its efficiencies and productivity by deploying next-generation digital tools. With the deployment of next-generation technologies, process plants can take decisions that are faster, reliable, and cost-effective. It is estimated that use of these technologies while improving productivity and efficiencies could result in a cost reduction of primary energy by 20-25% by 2050. He also announced that major Indian energy companies – like their Western counterparts – have announced NET ZERO policy.