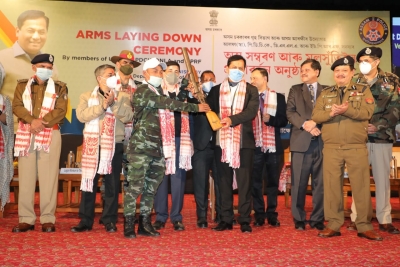 in National December 21, 2020 Comments Off on 64 militants belonging to four terrorist outfits formally laid down their arms before Assam Chief Minister 237 Views

Guwahati:21/12/20: In a significant development ahead of the next year’s assembly polls, 64 militants belonging to four terrorist outfits on Monday formally laid down their arms before Assam Chief Minister Sarbananda Sonowal.

The 64 terrorists, including 18 ULFA (I), 32 United People’s Revolutionary Front and 13 Dimasa National Liberation Army and one belomnging to the People’s Democratic Front of Bodoland deposited 14 AK series rifles, one M-20 semi-automatic rifle, 15 pistols, two 9-mm Carbine many other improvised guns and a large quantities of ammunition.

This arms laying ceremony comes after Drishti Rajkhowa surrendered before the security forces in an undisclosed location in South Garo Hills district of southwestern Meghalaya on November 11 night.

The 50-years-old Rajkhowa, who was the ULFA (I)’s second-in-comand after outfit’s chief Paresh Baruah, had surrendered along with four other top cadres of the outfit.

The ULFA (I), which was banned by the government in 1990, has been demanding an independent state of Assam.

Rajkhowa had been suspected to be a part of a shoot-out with police team at Bolbokgre village in South Garo Hills in Meghalaya in March.

Earlier on January 23, a total of 644 militants belonging to different insurgent outfits including ULFA (I) and National Democratic Front of Boroland (NDFB- Saoraigwra faction or NDFB-S) laid down their arms in a ceremony at the Gauhati Medical College and Hospital (GMCH) auditorium.

On January 30, in all 968 Myanmar based cadres of NDFB (S) surrendered to the government before the historic tri-partite Bodoland Territorial Region (BTR) peace accord was signed between the Center, Assam government and the militant outfit.

2020-12-21
Editor in chief
Previous: Centre to form committee to commemorate 125th birth anniversary of Bose
Next: Country’s resources belong to each and every citizen and should benefit all: PM