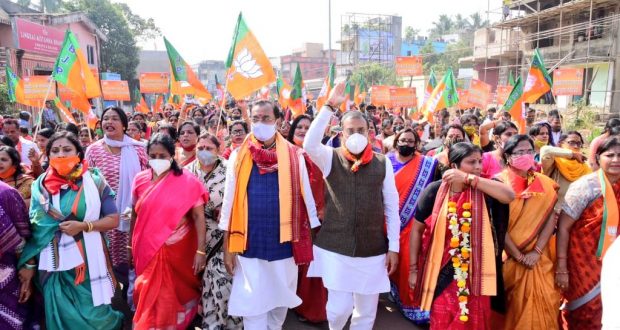 in State News December 20, 2020 Comments Off on BJP’s Odisha unit launched a five-day-long ‘padayatra’ to demand justice for a five-year-old girl Pari 369 Views

Bhubaneswar:20/12/20:The BJP’s Odisha unit on Sunday launched a five-day-long ‘padayatra’ or foot march to demand justice for a five-year-old girl found murdered in Nayagarh district in July this year.

The march began from Lingaraj temple in Bhubaneswar and will culminate at Jadupur, the native village of the girl, on December 24.

The BJP is demanding a Central Bureau of Investigation (CBI) probe into the case and the resignation of Minister Arun Kumar Sahoo on charge of shielding the accused.

“The National Commission for Protection of Child Rights (NCPCR) has already indicated that the state’s investigation into the case was not proper. We are sticking to our demand for a CBI inquiry. We will continue our agitation till our demands are not met,” said Vanathi Srinivasan, national President of the BJP Mahila Morcha.

Party’s national spokesperson Sambit Patra said that the NCPCR had recommended a central agency probe into the murder as it allegedly found that the police probe was severely flawed.

Reacting to the march, the ruling Biju Janata Dal (BJD) said that the opposition party was unnecessarily politicising the issue.

“It was an unfortunate incident. But, the opposition should not politicise it. Everyone knows how their party-led government in Uttar Pradesh handled the Hathras crime. They should introspect,” said BJD MP Pinaki Mishra.

The minor girl’s death snowballed into a major political controversy after her parents attempted self-immolation in front of the Assembly during its Winter Session. They alleged that Sahoo was shielding those responsible for their daughter’s death.

The state has set up a Special Investigation Team to probe the incident.

2020-12-20
Editor in chief
Previous: Biju Janata Dal commited to continue its fight for the people of Odisha
Next: India-Vietnam Leaders’ Virtual Summit