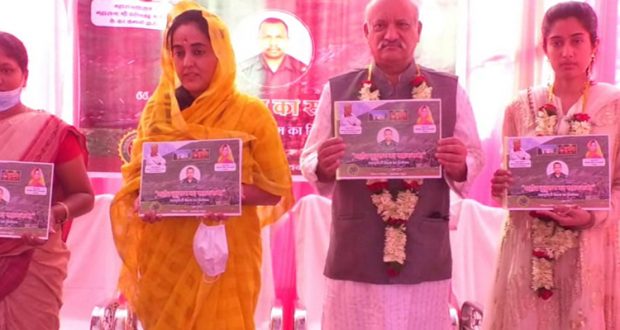 in District Diary December 19, 2020 Comments Off on Royal family of Mayurbhanj released a documentary film, ‘Nuduram Ka Safarnama’ on the life of Indian Army soldier 790 Views

Baripada: 19/12/20; Paying due respect to the fallen heroes of Odisha, the Royal family of Mayurbhanj on Friday released a documentary film, ‘Nuduram Ka Safarnama’ on the life of Indian Army soldier Nuduram Soren from the State who attained martyrdom in the Galwan Valley clash. Nuduram was a resident of Champauda under Mayurbhanj district.

Notable personalities graced the occasion during the release of the documentary film. Among them was the war widow of Nuduram, Laxmi Majhi, King Praveen Chandra Bhanj Deo, Queen Rashmi Rajlaxmi Bhanj Deo, and the Princess Akshita M Bhanj Deo.

After releasing the documentary, King Praveen said, “Nuduram’s martyrdom has awakened this place to the calls of Motherland. It makes us delve deep into the inspiring lives of Army men who brave bone-chilling cold, flesh melting heat and show nerves of steel against all foreign threats to get us a sound sleep at night. This is a touching documentary and I wish the producers will make it a point to make more such films on our heroes who have attained martyrdom while guarding our borders.”

The documentary was so moving that Rashmi Rajlaxmi could not hold her tears back while watching it. “We, the commoners can never fathom the mental turmoil the soldiers go through at border. Only after we lose them, their absence is real

The biopic, which was produced by ‘Tribal News’, encompasses the fearlessness in Nuduram’s life who stood as a braveheart in front of the enemy forces at Galwan Valley in Ladakh and eventually made the ultimate sacrifice protecting his motherland.

Nuduram had joined the Indian army in 1997 and was posted as Naib Subedar in 16 Bihar regiment. Now he is survived by his wife Laxmi Majhi and three daughters- Ganeswari, Manasi and Sonali.

Twenty Indian Army personnel, including a colonel, were martyred in the clash with Chinese troops along the LAC in Galwan Valley in June this year, the biggest military confrontation between the two Asian powers in over five decades.

Though Nuduram’s last rites were performed with full state honours, this documentary will certainly go miles in inspiring children and youths to join the defence services.

2020-12-19
Editor in chief
Previous: NE Region will emerge as a favourite Tourist and Trade destination in India in the post-COVID era
Next: Amit Shah’s Mega Rally In West Bengal