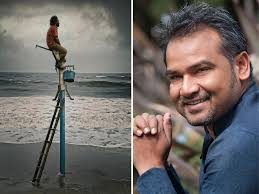 Bhubaneswar:19/12/20: Nila Madhab Panda’s first Odia film, ‘Kalira Atita’ (‘Yesterday’s Past’) has been selected to be screened at the Panorama section at IFFI, which is scheduled for next month. The film, starring Pitobash Tripathy, is a story of the struggle between man and sea, highlighting the issue of seawater ingression. It was also one of the finalists for India’s official entry for Oscars.
The journey for this film started when Nila saw a photo of a hand pump in a newspaper in 2006. He says, “I was shocked to see the hand pump drowned in the sea. A hand pump is for groundwater and in our village, we used to pump groundwater using a hand pump. But the picture showed the horrifying truth of sea ingression.”

If prophecies are to be believed, the global warming and subsequent rise in the water level in the Bay of Bengal will result in Puri being submerged in the sea.  Achyutananda Das, a 16th-century saint from Odisha, had written about doomsday in his famous book titled Achutananda Malika.
National Award-winning director Nila Madhab Panda’s first Oriya film, Kalira Atita (Yesterday’s Past), is inspired by the prophesies of Achyutnanda. It revolves around a man from the Satavaya village in east coast of Odisha which has been swallowed by the sea, a phenomenon common on our east coast.
Panda who has been shooting since 2005, says the reason he wanted to make it is because for many climate changes is still a future shock and so leave them untouched. “This film emphasizes that it is a harsh reality and that people are losing their lives and livelihood because of it,” the director asserts. 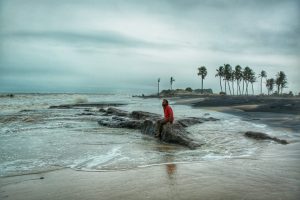 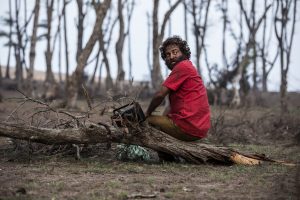 Nila says that he has followed the story (of sea ingression) over the years, and he learnt of two more villages submerging in the sea in these years. Nila said he did not follow any screenplay or story for this film. He took his team to affected areas and explored them. The film has been shot at real locations in remote areas in Kendrapara district in Odisha. It has been shot without makeup, sets, and lights. He says, “I have seen how over the years, village after village has been snatched by the sea. The crisis is so large and so real. Imagine, the handpump which I have shown in the poster of my film is now submerged. This is not a documentary but is also not made in a scripted format. In short, it is about a man and sea. There are very few dialogues in the film, and it is almost like a silent film.”

Synopsis of the film

Gunu(Pitobash Tripathy) a disillusioned young man from Satavaya village, travels restlessly towards death, memories of a past cyclone propelling him into the eye of one that his coming.  Hoping to reunite with his lost family, he returns to his village, five days before the cyclone, to find that it is now underwater. Gunu’s struggle to survive the fury of nature is a portrayal of emotional trauma and human triumph.

Nila Madhab Panda as a filmmaker has created a new narrative with his insights into contemporary India and the psyche of its people. Born in Dasharajpur, a small, inaccessible village in Odisha, located on the banks of the river Mahanadi, he carries with him the nostalgia of rural life, a world he calls “little India”. He brings his personal experiences to bear on his explorations, giving us visual poetry, which is at once charming and thought-provoking. A Padma Shri awardee in 2016, he was conferred with D.Litt. Honoris Causa by the Utkal Culture University, Odisha two years later. His maiden feature film, I am Kalam, in 2010, won 34 international awards, along with a National Award

His second feature film, Jalpari (Desert Mermaid), received the MIP Junior Award at Cannes. Another feature-length documentary, God’s Own People (2016), narrated by Amitabh Bachchan, is about the reincarnation of Lord Jagannath. He has also directed Babloo Happy Hai (Babloo is Happy), Kaun Kitney Paani Mein (In Troubled Water), and several other films, documentaries, and TV series. Among them, Kadvi Hawa (Dark Wind), bagged another National Award and international acclaim. His recent film for children, Halkaa (Relief), inspired by the Swachh Bharat (Clean India) campaign, has traveled to 32 international film festivals and won two Grand Prix awards.
Nila Madhab Panda’s career-graph is characterized by the intent to combine filmmaking with activism. His film, Climate’s First Orphans, which addresses the impact of climate change, caught the eye of policymakers and scientists alike. His new film, Yesterday’s Past, and Shadows of Wind, a feature-length documentary, also address the same issue and its impact on India.

He founded the International Screenwriters Lab in India in 2008 to create quality scripts for family and children in Asian cinema. He has produced several short films in London, funded by the Arts Council England. His recent short film is a part of an anthology by 11 directors from 11 countries, produced by ART for the World in association with the United Nations Department of Public Information (UNDPI). It premiered at the Rome International Film Festival in 2019.

2020-12-19
Editor in chief
Previous: Getting a learner’s or a driving licence will be user friendly but stricter for people of Odisha
Next: Odia Cinema in Indian Panorama