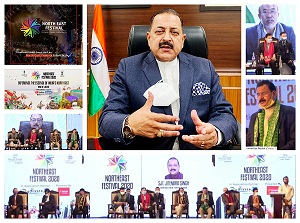 in National December 19, 2020 Comments Off on NE Region will emerge as a favourite Tourist and Trade destination in India in the post-COVID era 272 Views

Newdelhi:19/12/20:Union Minister of State (Independent Charge) Development of North Eastern Region (DoNER), MoS PMO, Personnel, Public Grievances, Pensions, Atomic Energy and Space, Dr Jitendra Singh today said that North Eastern Region will emerge as a favourite Tourist and Trade destination in India in the post-COVID era. Speaking as the Chief Guest in the 8th edition of North East Festival organized virtually, he said that North-Eastern Region will take a lead for India to emerge as an economic power with the support of its huge natural and human skill resources. He said the region will work as a “new engine” to the economy and added that it will emerge as an alternative to the European tourist destinations by virtually remaining pandemic free when others parts of the world were infested with virus.

Dr Jitendra Singh said that there has been a significant development in terms of Road, Rail, and Air connectivity, helping facilitate the movement of goods and persons not only across the region but also across the country. He said that the youth of the region has become more aspirational in recent times and will play an important role to take the region to greater economic heights.

Referring to the Act East policy of the government, Dr Jitendra Singh said that the North Eastern Region has a special role to play in the promotion of trade and business relations with ASEAN as it is the gateway to the growing economies of Southeast Asian Nations. He said Prime Minister Shri Narendra Modi has changed the policy of “Look East” to “Act East” to take the bilateral cooperation to newer heights.