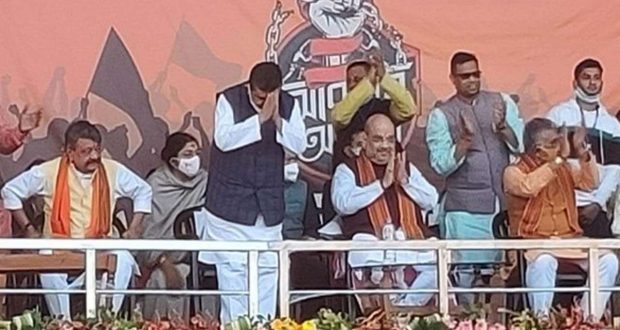 Kolkata: 19/12/20:A convoy of as many as 30 vehicles headed out for the Midnapore College Ground where Union Home Minister Amit Shah was scheduled to address a mega public meeting on Saturday. The convoy packed with dissident lawmakers, MPs and other Trinamool Congress leaders set out for the venue at around 12.15 p.m. from Mecheda’s guest house in East Midnapore.

They started after former West Bengal Transport and Irrigation Minister Suvendu Adhikari stepped out of his Contai residence for the Midnapore College Ground.

According to sources, at least nine sitting legislators, besides Suvendu Adhikari, and a Lok Sabha MP from the state’s ruling Trinamool Congress, Left Front and the Congress are there in the convoy.

Apart from them, many district leaders were also on the list of those who will join the saffron brigade on Saturady afternoon during Shah’s grand event.

Some of the names which are likely to switch to the BJP in Bengal are Barackpore’s Trinamool MLA Shilbhadra Dutta, North Contai MLA Banashree Maity, Kalna’s MLA Biswajit Kundu, East Burdwan legislator Saikat Panja, Dipali Biswas — an MLA from Gajal, Sukra Munda from Nagrakata and Haldia’s Communist Party of India-Marxist (CPI-M) MLA Tapasi Mondal, amongst many others.

“Now I say tolabaaj bhaipo hatao (Get rid of the extortionist nephew)…I thank my elder brother Amit Shah for accepting me as a primary member of the world’s largest political party BJP. I will start working for the party from tomorrow itself,” Adhikari declared at the public rally. He said that a “deep rot” has set in the Trinamool Congress.

Adhikari joined the BJP’s mega rally in the presence of Union Home Minister Amit Shah. Adhikari joined the podium along with Shah at Midnapore College Ground. He was received by Union minister of state for Woman and Child Development Debasree Choudhuri. The ex-Nandigram legislator was seen sitting by the side of Shah on the dais.

“When I was infected with Covid-19 no one from my old party (Trinamool Congress) called me enquiring about my health. I have worked for that political party for the past 21 long years. But my elder brother Amit Shah ji called me twice asking about my health,” Adhikari said.

“Trinamool Congress will come second in the forthcoming state assembly polls as the BJP will form the government in Bengal in 2021. I feel bad to see that many works we could not do. It is not possible for a person to stay in the Trinamool Congress with self-respect. There is no value of trust in the Trinamool Congress. They are calling us betrayers. I want to say that I have my mother and her name is Gayatri Adhikari. She has given birth to me. And another is my motherland India. If I have to call anybody else my mother I will take the name of my motherland. It is not possible for me to call anyone else my mother,” he said.