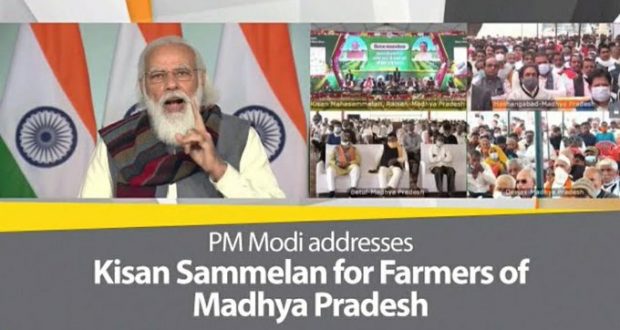 Speaking on the occasion, the Prime Minister stressed, no matter how hard the farmer works, if there is no proper storage of fruits-vegetables-grains, then the farmer is bound to  suffer huge losses. He urged the business world to contribute in developing modern storage facilities, cold storage and setting up new food processing ventures. He said this will serve the farmers and in the true sense, serve the country.

The Prime Minister stressed that  Indian farmers should have access to the modern facilities available to the farmers in the developed countries, it cannot be delayed any longer. He added in a rapidly changing global scenario, the situation in India cannot be accepted as the farmer becomes helpless due to lack of facilities and modern methods, it is already too late.

The Prime Minister cited that the previous Governments did not implement the Swaminathan Committee report for over 8 years. Even the peasants’ agitation did not shake the consciousness of these people. He said these people ensured that their government does not have to spend much on the farmer. He criticized the opposition that farmers are used by them for politics whereas his government is dedicated to farmers and considers farmers as Annadata. Shri Modi said the recommendations of the report of the Swaminathan Committee was implemented by this Government, giving MSP of one and a half times the cost to the farmers.

On debt waiver, the Prime Minister said it does not reach the small farmer who did not go to the bank, who did not take the loan. He said in the PM-Kisan scheme every year farmers will get about 75 thousand crore rupees, directly into farmers’ bank accounts. No leakage, no commission to anyone. He also described how the availability of urea improved due to neem coating and crack down on corruption.

The Prime Minister criticized that if the previous governments were concerned about farmers, then around 100 large irrigation projects in the country would not hang for decades. Now our government is spending thousands of crores of rupees to complete these irrigation projects in mission mode. He said that the Government is working to ensure water to every farm. He said that the government is equally promoting beekeeping, animal husbandry and fisheries along with grain-producing farmers.