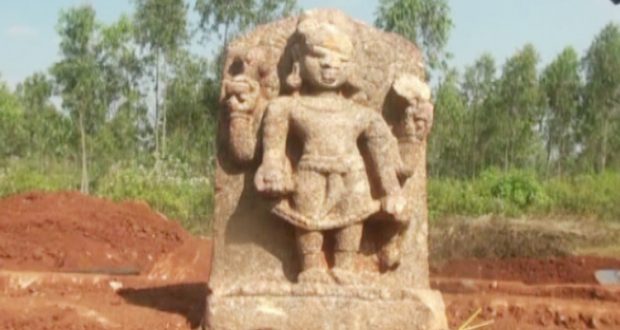 Koraput:18/12/20 An ancient statue believed to be representing Jainism has been reportedly discovered on Friday during a temple restoration and excavation of nearby sites at Subai, a place of archaeological importance in Koraput district.

According to reports, State Archaeology department has been undertaking restoration of neglected shrines in the district. During the restoration of the Subai Jain temple, excavators discovered a statue and some remains of temples, a few distances away from the Jain temple.

Gopinath Bisoyi, the contractor engaged in the site excavation said, “We were completely unaware of existence of another temple nearer to the mentioned site. While excavating the proximity areas, we discovered a precious statue. There are chances of getting more valuable artefacts and ancient statues if further excavation is carried out in the surrounding areas.

”Although, it is has been excavated from a Jain temple, superficially, the sculpture appears like a statue of ‘Lord Vishnu’. After a detailed study and examination we might be able to arrive at any conclusion regarding its identity and Geologic Time Scale (GTS),” Sethi added.Priyabrata Patra, a local history researcher said, “Koraput beholds a rich cultural identity since the reign of Nanadapur ruler Vijaya Chandraksha Deo. He was under the subsidiary alliance of Puri rulers and often sent soldiers in the time of need.”

2020-12-18
Editor in chief
Previous: Steel Minister emphasizes role of SAIL steel plants in Mission Purvodaya to drive development of eastern India
Next: Getting a learner’s or a driving licence will be user friendly but stricter for people of Odisha