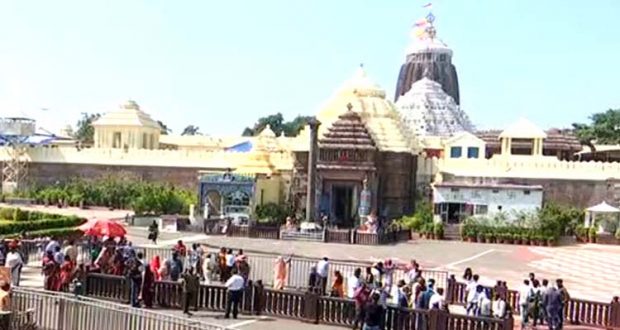 Bhubaneswar:17/12/20 The preparations to reopen Srimandir in Puri from December 23 have begun keeping in mind all the Covid-19 protocols. The 12th-century shrine has been closed for the last nine months due to the ongoing pandemic situation.

A closed-door meeting in this regard was held between Puri district collector Balwant Singh, SP Kanwar Vishal Singh, and officials of the managing committee of Shree Jagannath Temple Administration (SJTA) on Wednesday.

On the other hand, former Orissa High Court judge and OHRC Chairperson Justice Bijoy Krishna Patel also attended the meeting and suggested certain measures to be taken in order to prevent the spread of coronavirus infection.

“We are concerned about the health of devotees and pilgrims while they avail their right to liberty of worship in temples and opening of temple should not be the reason behind the rise in Covid-19 cases. I discussed the matter with the officials so that the safety protocols strictly adhere as people’s health is our priority,” said Justice Patel after attending the meeting.

Meanwhile, devotees are delighted with the decision and hope to have the glimpse of the presiding deities of Puri Srimandir soon.

In a related development, Kendrapara district administration on Wednesday announced to reopen the famous Baladevjew temple in Kendrapara Town from January 3 next year amid strict adherence to Covid-19 guidelines.

Kendrapara District Collector Samarth Verma informed that no more than 100 people will be allowed to enter the shrine after it reopens. Maintaining social distancing, use of hand sanitizer and masks have been made mandatory for the devotees visiting the shrine.

Similarly, the Lingaraj temple in the Capital city Bhubaneswar will open from December 27.

In the first phase from December 27 to 31, only servitors and their family members will be allowed into the shrine. The temple will remain shut for darshan on January 1 and 2 to avoid large congregation of devotees because of the New Year.

Later from January 3, the residents of Bhubaneswar will be allowed into the temple and finally will be thrown open for all public from January 6.