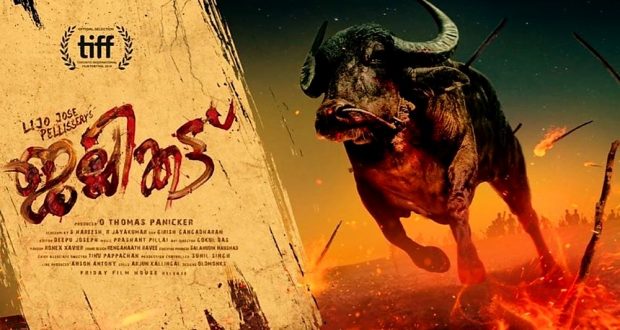 Malayalam film Jallikattu is India’s official entry to the Best International Feature Film category of the 93rd Academy Awards. The film beat out 26 other films, including The Disciple, Shakuntala Devi, Chhapaak, Eeb Allay Ooo!, Serious Men, Bulbbul, and Gunjan Saxena. It was chosen for its depiction of the “raw side of human beings, that we are worse than animals,” said Rahul Rawail, chairman of Film Federation of India jury which selected the film.

According to Wikipedia, Jallikattu (or sallikkattu), also known as eru thazhuvuthal and mañcuvirattu, is a traditional event in which a bull (Bos indicus), such as the Pulikulam or Kangayam breeds, is released into a crowd of people, and multiple human participants attempt to grab the large hump on the bull’s back with both arms and hang on to it while the bull attempts to escape. Participants hold the hump for as long as possible, attempting to bring the bull to a stop. In some cases, participants must ride long enough to remove flags on the bull’s horns. Jallikattu is typically practiced in the Indian state of Tamil Nadu as a part of Pongal celebrations on Mattu Pongal day, which occurs annually in January. As there were incidents of injury and death associated with the sport, both to the participants and to the animals forced into it, animal rights organizations have called for a ban to the sport, resulting in the court banning it several times over the past years. However, with protest from the people against the ban, a new ordinance was made in 2017 to continue the sport.

Something like the Tamil equivalent to Pablona’s bull runs, in case any European needs a point of reference.

Lijo Jose Pellisssery uses this custom, in order to present his thoughts on human nature, through a cinematic approach that can only be described as magnificent. Let us take things from the beginning, though.

The screenplay by S. Hareesh and R. Jayakumar is based on the short story “Maoist” by Hareesh, and takes place in a remote village in Thrissur, where everybody seems to be obsessed with buffalo meat. Thus, Kalan Varkey, the local buffalo butcher, is treated like something of a celebrity. However, during the butchering of an animal at night, at the orders of a local “gentleman” who is preparing a Lucullian feast for his daughter’s marriage (but seems to enjoy the food as much himself, Kalan’s assistants, including Anthony, allow the buffalo to escape, and soon, is running amok through the village, causing havoc across its path. The village goes to lockdown, while the men turn into a mob as they try to catch the beast.

Their efforts are soon proven widely unsuccessful, however, while the inner issues that torment the inhabitants of the village, soon come to the fore, including the local police constable, and a number of different local families and groups. As the animal continues to roam free, tension mounts and reaches its apogee upon the appearance of  Kuttachan, a local ex-hero who has driven away from the village for smuggling, after the machinations of Anthony, who coveted the same woman in the past. Needless to say, their feud adds even more fuel to the fire…

There are a number of filmmakers whose sense of rhythm and its implementation on film has defined their masterful style, with Johnny To, Quentin Tarantino, and Guy Richie being the first that comes to mind. After watching “Jallikattu”, I can easily say that Lijo Jose Pellissery is among them, with him and his editor, Deepu Joseph, presenting a movie whose editing is worthy of an Oscar. The rhythm of the movie, which is sometimes dictated by a clock, sometimes by the music, begin to weigh upon the viewer from the first scene, and actually grabs him from his neck and never lets him go, creating angst and agony through speed and tempo, in the most entertaining way.

And talking about the music, Prashant Pillai’s effort in the department is a great accompaniment to the constant movement that dominates the narrative, occasionally giving the story a sense of decay, occasionally a sense of epicness that works wonders for its aesthetics. Either through polyphonic singing (or even cheering sometimes) or through the use of instruments, the soundtrack of “Jallikattu” is as accomplished as the rest of the production values

The same applies to Girish Gangadharan’s cinematography, who uses all aspects of the rural setting (the somewhat rundown village, the flora, the fields, and particularly the narrow paths created from the thick vegetation) to present images of extreme beauty, that also are a crucial part of the narrative. The hole in the ground, the various chasing scenes, and most of all, the epic finale, where all aspects of the film reach their highest point, is the highlights of a great effort. At the same time, the way he has shot the vast number of people appearing in the title, and particularly the way they turn from individuals to small groups, and eventually to a mob, is another testament to his prowess, as much as to Pellissery’s ability to direct large numbers of people simultaneously.

The quality of “Jallikattu” remains at the same level regarding the narrative. The way the people turn into a mob, and the lurking violence that preexisted and “finally” finds a way out during the hunt, soon present two eloquent questions to the viewer: “Who is the animal and who is the human here?”, and consequently, as the first question is answered quite soon, “who is in fact, the most dangerous animal, the buffalo who is trying to run for its life or the ones who became a bloodthirsty mob in order to hunt it down?”. The hunting, the repeated idiocy of all involved, the lack of any kind of leadership that could provide some coordination, the feud between Anthony and Kuttachan, which manifests in the most inappropriate time, a number of secondary plots, and, most of all, the finale, give a definite answer to both these questions, in the most impressive fashion. Lastly, the question that actually derives from all the aforementioned, is if humanity has really evolved through a centuries, with the movie giving another definite answer in that regard also.

What is also impressive is that Pellissery, inside all the bloody chaos and contextual depth that dominates the narrative, has managed to include a number of rather humoristic moments that lighten the mood significantly. The “hippy” who criticizes others for cursing and harming nature, the illiterate council member and his interaction with the “educated” man of the village, the policeman’s interactions with his wife and many others are hilarious to watch and also add to the entertainment the film offers.

In conclusion, “Jallikattu” is an audiovisual extravaganza, a movie that manages to balance depth of context with entertainment in the most impressive way, and in essence, a true masterpiece.

Panos Kotzathanasis was born in Thessaloniki, Greece, in 1981. He is a journalist/ film critic specializing in (East-South) Asian cinema. He is the owner of Asian Movie Pulse and a regular contributor to Taste of Cinema and Hancinema. His reviews, interviews, lists, and tributes also feature on Chinese Policy Institute, Eastern Kicks and a number of online and printed publications in Greece and Europe.

2020-12-15
Editor in chief
Previous: Odisha look very hot this year. Prices of almost all commodities in the State
Next: Ollywood actress Varsha Priyadarshini &The Click Productions have launched an initiative’ “Ama Pathaagaara”