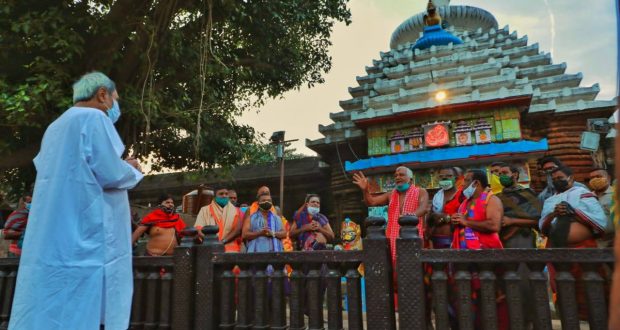 Bhubaneswar:15/12/20: After remaining shut for several months due to Covid-19 pandemic, the famous Shiva shrine, Lingaraj temple in Bhubaneswar will open door for devotees from December 27.A decision in this effect was taken in the administrative meeting, informed two servitors of the shrine- Kamalakanta Badu and Biranchi Pati.

The decision came a day after the Odisha Cabinet approved Sri Lingaraj Temple Ordinance 2020 for better management of the shrine.

According to the decision taken in the administrative meeting today, families of servitors will be allowed to have darshan in the first phase of reopening from December 27 to 31. The general darshan of devotees will be allowed from January 6

.“The temple will remain closed on January 1 and 2, 2021. During the next three days, darshan will be limited only for Bhubaneswar residents. General darshan by devotees will begin from January 6. A maximum of 500 people will be allowed to remain inside the shrine at a time,” said BMC Commissioner Prem Chandra Chaudhary.

During the darshan in first three days, devotees will have to furnish Covid-19 negative reports (RT-PCR or antigen) conducted in the last four to five days, Chaudhary said.For Covid-19 management during the general darshan, a screening team will be engaged at the shrine while a testing center will function from 7 am to 10 pm, he said.

“Other religious institutions in Bhubaneswar will also be allowed to reopen from January 3 but under certain conditions. All shrine committees will submit an undertaking mentioning maximum intake capacity of devotees on basis of which they will be permitted as per their preparation,” Chaudhary added.