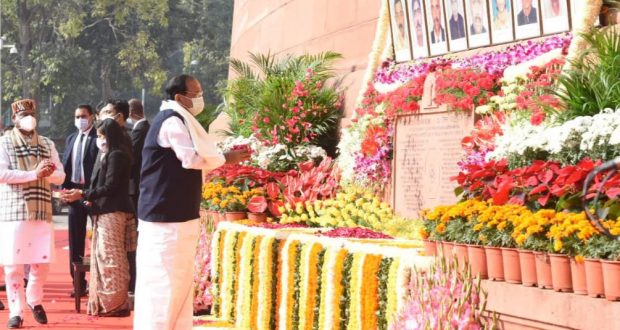 in National December 13, 2020 Comments Off on Vice President pays tributes to the martyrs of 2001 Parliament terror attack 312 Views

In a Facebook post on the anniversary of the 2001 terror attack on the Parliament, the Vice President said that December 13 is a stark reminder of the menace of terrorism and its professed antagonism to democratic values and economic aspirations.

Paying rich tributes to the security personnel who sacrificed their lives to defend the Parliament House, Shri Naidu said that their acts of sacrifice will forever be etched in the minds of our countrymen. Earlier in the day, the Vice President had paid floral tributes to the martyrs of the attack along with the Prime Minister, Lok Sabha Speaker, and other senior ministers.

Praising the courage of the CRPF Constable Kamlesh Kumari who first spotted the terrorists and kept tracking and informing them about their movements in the Parliament House complex, the Vice President said that her bravery was instrumental in quickly putting down the terrorists’ game plan. “She fell to the barrage of the bullets pumped into her and became a martyr, leaving a saga of inspiration and commitment to fight for the country”, VP said in a heartfelt tribute to the woman constable.

The Vice President wrote that the terror attack on the temple of Indian democracy by a band of terrorists mentored and trained by a neighbor shook the whole world and a catastrophe was averted by the alert and brave security personnel guarding the Parliament House.

Referring to the attack on World Trade Centers same year, the Vice President said that in the first year of this millennium, the most populous democracies of the world, India and the USA, were at the receiving end. Observing that in the last two decades several such attacks of different degrees were witnessed by the humanity, VP cautioned that the only agenda of terror outfits is to disrupt the democratic and economic fabric of the world and force humanity into a dark era.

Calling for an end to such nefarious designs through effective and collective global action, Shri Naidu said that the State and Non-state actors who prop up terrorism as an instrument of State Policy for narrow ends should be isolated by the global community and made to behave.

He warned that the message of 2001 should awaken every citizen and every country to the lurking dangers of terrorism for mounting an effective action to roll it back.

Drawing attention to India’s proposal for the adoption of a UN Convention against Terrorism, the Vice President said that many countries from across different continents support India’s voice in this regard. “However, there are some who are oblivious to the larger threats of terrorism out of narrow geopolitical and economic considerations and they should realize that in the end, everybody will end up a loser if the menace of terror is not rolled back through a united effort”, VP wrote in his Facebook post.