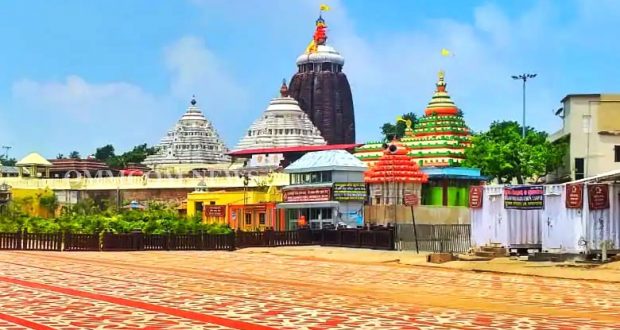 in National, State News December 12, 2020 Comments Off on Lord Jagannath Temple is likely to throw open its gates for devotees before New Year 550 Views

Puri:12/12/20:The Shree Jagannath Temple here is likely to throw open its gates to devotees before New Year after being closed for nine months due to COVID-19, the temple administration said on Saturday. The Shree Jagannath Temple Administration (SJTA) chief administrator Krishan Kumar said the decision on reopening the temple was taken keeping in view the religious sentiments of the devotees and the COVID-19 protocol will be strictly observed when the 12th-century shrine reopens.

A meeting of temple servitors ‘Chhatisa Nijog’ was held and the SJTA will send its recommendations to the state government for the final approval to reopen the temple, he told PTI. Kumar said that it is planned to reopen the temple on December 23 and the people of Puri will get the first opportunity to enter the temple. The detailed standard operating procedure will be issued after the government’s approval.

We will urge the government to reopen the temple for residents of Puri in the first five days of its reopening. These people are unable to have darshan of the Lords even though they live very close to the temple, he said.

The temple will remain closed on January 1 and 2 in view of the possibility of the rush of devotees to the pilgrim town on New Year’s Day. However, from January 3 onwards the temple will be kept open for all. From that day COVID-19 negative certificates given in the last 48 hours will be required and both RAT and RT-PCR tests will be allowed. All temple servitors will have to produce identity cards for entry into the shrine.

Initially, 5,000 devotees will be allowed to enter into the temple. “Thereafter the number of devotees allowed in per day will be gradually increased every week, he said. The SJTA chief administrator thanked servitors for the smooth conduct of the world-famous Ratha Jatra of Lord Jagannath during the COVID-19 pandemic.

2020-12-12
Editor in chief
Previous: Several Events being organised across the country to generate awareness about the mega India International Science Festival 2020 ahead of the main event
Next: Vice President pays tributes to the martyrs of 2001 Parliament terror attack