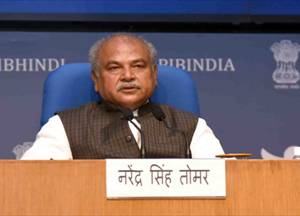 in National December 10, 2020 Comments Off on The doors of the Union Government are always open for dialogue with Farmers Unions- Narendra Singh Tomar 228 Views

Newdelhi:10/12/20:Appealing to the Farmers Union leaders to continue the dialogue and to find an amicable solution, Union Minister for Agriculture and Farmers Welfare, Rural Development and Panchayati Raj, Shri Narendra Singh Tomar along with Union Minister for Consumer Affairs, Food and Public Distribution, Railways and Commerce, Shri Piyush Goyal outlined the various suggestions that have been given to farmers in a proposal to address their concerns about the Farm Acts. They were speaking to media at a Press Conference in New Delhi today.

The Farmers Produce Trade and Commerce (Promotion and Facilitation) Act 2020 and Farmers (Empowerment and Protection) Agreement on Price Assurance and Farm Services Act 2020 and the Essential Commodities Amendment Act 2020 are the biggest agricultural reforms in the country so far. The reforms will provide farmers market freedom, encourage entrepreneurship, access to technology and they will transform agriculture.

Both the Union Ministers, Shri Tomar and Shri Goyal spoke about the various measures that the Modi government has taken since its inception to improve the lot of farmers and towards strengthening the Agriculture sector. They said the latest Acts were reforms undertaken after many rounds of consultations with stakeholders. They give the farmers freedom to sell anywhere and strengthen farmers with a protective legal framework when dealing with private companies. Agriculture Minister gave an example of a farmer from Maharashtra who got immediate payment from the trader after the grievance was successfully addressed under the new laws. They said when the Centre makes a law it is for the whole country. The Central Government is well within its Constitutional Rights while making laws on Agricultural trade. The Budgetary allocations for agriculture have seen a significant rise from 2014-2020 and this shows the commitment of the Govt. towards farmers and the rural sector. An allocation of 75,000 crore has been made for just PM Kisan initiative under which farmers get Rs 6000 per year of direct income support. Rs 1 Lakh crore Agri Infrastructure has been set up for the development of farm gate infrastructure. Neem coated urea scheme was introduced by Modi Govt. for reduced use of chemicals and improved soil health. The Modi Government announced MSP hikes based on the recommendations of the Swaminathan Commission and on the formula that farmers must get at least 1.5 times the cost of production. The Government has also ensured greater procurement and greater payment to farmers. Under the PM Kisan Maan Dhan Yojna, farmers are given pension support. Farmer Producer Organisations (FPO’s) bring farmers together and provide them with a greater say in their future. 10,000 such FPO’s are being created.

All these initiatives are aimed towards the farmer whose welfare and whose income occupies the central place in the Government’s schemes for Agriculture.