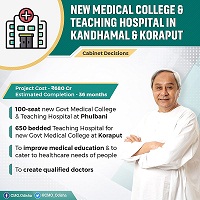 Bhubaneswar:9/12/20: Odisha Cabinet on Wednesday resolved to move the Union Government to reiterate its earlier stand on the implementation of recommendations of MS Swaminathan Committee regarding Minimum Support Price (MSP) of all crops, for doubling the farmers’ income.

The State Legislative Assembly had earlier passed unanimous resolutions in this regard in 2017 and again in 2018.

The M.S. Swaminathan chaired National Commission on Farmers had recommended that “MSP should be at least 50% more than the weighted average cost of production”.

The Odisha government’s decision comes at a time when the farming community in the entire State and the country is in unrest over enactment of the new farm bills.

Key Highlights of The Cabinet Resolutions

— Proposal for amendment of the Odisha Professional Educational Institutions (Regulation of Admission and Fixation of Fee) Act, 2007 by promulgation of an Ordinance under Article-213 of the Constitution of India.

— Pursuant to the decision of the Cabinet, the cadre of Odisha Engineering Service has been restructured by keeping the total cadre strength intact, abolishing the post of Deputy Executive Engineer (DEE), merging the post of Superintending Engineer, Level-II and Level-I has been merged and designating as Superintending Engineer in pay Level -14, creating one new post of Additional Chief Engineer in pay level — 16 in between SE and CE, increasing the posts of AEE to be filled up by AE of Odisha Diploma Engineering Service from 33% to 40%. Further to bring in meritorious degree engineers to the Odisha Engineering service with utmost transparency and a strict time schedule under direct recruitment quota, it is decided to recruit through the score in Graduate Aptitude Test in Engineering (GATE).

— The Odisha Home Department contemplated to amend rule 4(a) (i) of OSS Recruitment Rules to dispense with the mandatory provision of holding recruitment every year and make necessary provision for State Government to hold the recruitment as per requirement time to time.

— Government of Odisha have taken a decision for execution of Rural Piped Water Supply Project under one package to provide safe drinking water in Bargarh District out of BASUDHA(RIDF) funding.