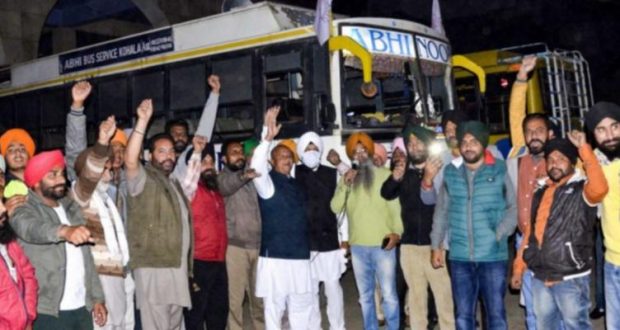 No major impact of Bharat Bandh called by farmers’ unions

in National December 8, 2020 Comments Off on No major impact of Bharat Bandh called by farmers’ unions 266 Views

Newdelhi:8/12/20:There was no major impact of Bharat Bandh called by farmers’ unions today as all markets, shops, banks, government, and private offices, and other commercial establishments functioned normally across the country.

Elaborate security arrangements were made in all States and Union Territories in the wake of the call. Transport and traffic were also normal in cities like Delhi and Mumbai as police kept a tight vigil. The farmers’ unions protesting against the new farm laws at the borders of the National Capital had called for a nationwide strike between 11 am and 3 pm.

Normal life remained unaffected in most parts of the country including Uttar Pradesh, Gujarat, Madhya Pradesh, Himachal Pradesh and Jammu division as shops and commercial establishments remained operational in these states with transport plying normally on the roads.

In Maharashtra, members of a farmers’ organization staged a ‘rail roko’ in Buldhana district as part of the Bharat Bandh. However, Maharashtra State Road Transport Corporation buses were plying as scheduled.

In Telangana, trade unions held demonstrations at busy locations in Hyderabad. AIR Correspondent reports that Bank Employees unions however stayed away from the bandh and banking services operated as usual. Government offices and offices of Public Sector Undertakings worked as usual.