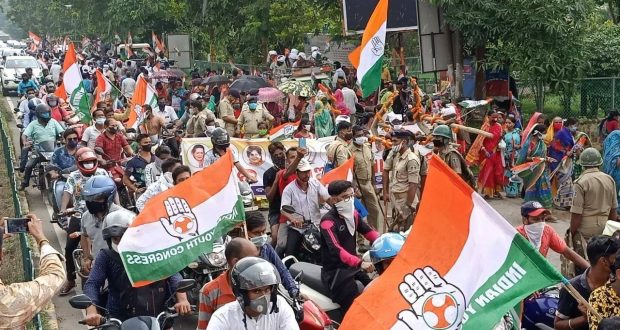 in State News December 8, 2020 Comments Off on Hundreds of Left and Congress activists in Odisha participated in the ‘Bharat Bandh’ 444 Views

Bhubaneswar:8/12/20: Hundreds of Left and Congress activists in Odisha on Tuesday participated in the ‘Bharat Bandh’ called by the farmers against three farm laws by the Centre.

Normal life was affected across the state as eight political parties, including the Congress, Left parties, and various farmer organisations and trade unions supported the Bharat Bandh.

Due to the protest, several banks, government offices and business establishments remained closed.

The protesters staged road blockade at several places across the state. The Congress workers also carried out bike rallies in Bhubaneswar.

“More than 60 per cent of people depend on agriculture activities in the country. The country would not progress if its economy is affected. The Modi government wants to benefit the corporates. We want to repeal the farm laws. People have extended full support to Bharat Bandh,” said Patnaik.

He also attacked the ruling Biju Janata Dal (BJD) saying both the Bharatiya Janata Party (BJP) and the regional party were supporting each other.

2020-12-08
Editor in chief
Previous: National COVID-19 recovery rate improves to 94.59 per cent
Next: BMC & BDA have initiated the process to make ‘Ekamra Kshetra’ beggar-free on a priority basis