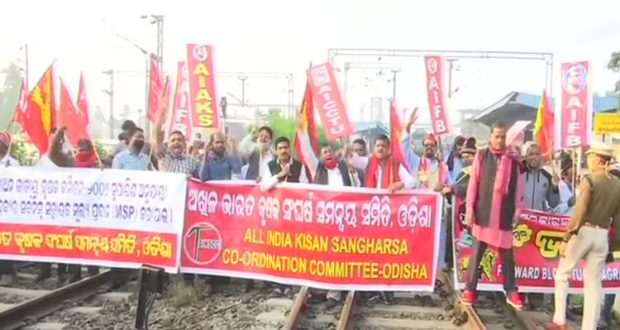 in State News December 8, 2020 Comments Off on Bharat Bandh: Normal life came to a grinding halt here in Odisha 407 Views

Bhubaneswar:8/12/20: Protesting the newly enacted farm laws, farmers unions across the country supported by many Opposition parties and some sections of people have called for ‘Bharat Bandh’ – a nationwide shutdown that will remain in force from 11 AM till 3 PM today.

Normal life came to a grinding halt here in Odisha as vehicular movement on many routes has been disrupted due to the blocking of highways and main roads. Train services too were affected due to rail roko agitation at many stations over demands to repeal the new farm laws. Voicing their support to the nationwide strike call given by various farmers’ unions, several Opposition parties including the Congress party in Odisha, the State units of Communist Party of India-Marxist (CPI-M), Nationalist Congress Party (NCP), Samajwadi Party (SP), SUCI, All India Forward block decided to observe the Bandh in State from 6 AM to 6 PM today.

Odisha Congress chief Niranjan Patnaik said, “Farmers are protesting for their rights, and Prime Minister Modi is deliberately prolonging the issue with his government’s fake negotiations. Fulfill their demands because the entire of India is with our annadatas!”

Farmer leaders have however assured that the closure would be ‘peaceful’ and the sole aim of the Bandh is to send a message to the government that the protest is a national movement.

“Farmers Unions/organisations have proposed for observing Bharat Bandh from 6 AM to 6 PM. Political parties like Congress. CPI, CPM, SUCI, All India Forward Block, CPI(ML), CPI (ML). CPI(ML), RS, NCR AAP, and their frontal organizations will support and participate along with the support of All India Trade Union like AITUC, CITU, HMS, INTUC, UTUC, AIUTUC, TCUU, AICCTU, LPF (Except BMS),” it is stated by Home department.