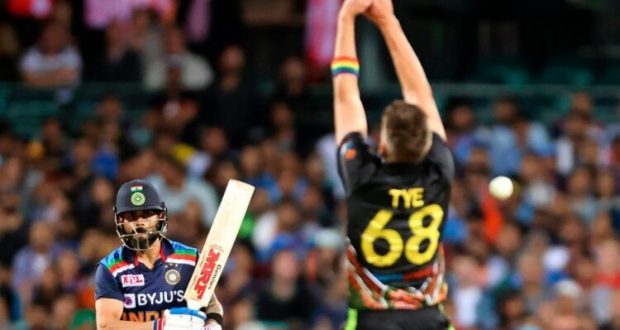 Sydney:8/12/20: Riding on wicket-keeper-batsman Matthew Wade’s 80 and Glenn Maxwell’s 54 and a combined haul of five wickets for 64 runs in 10 overs by spinners Mitchell Swepson, Adam Zampa and Maxwell, Australia defeated India by 12 runs in the third and final T20 International at the Sydney Cricket Ground.

The win restored some pride for Australia as they had lost the series 2-1 after going down in the first two matches.

The Aussies had won the ODI series 2-1 prior to the T20Is.

India, who lost KL Rahul on just the second ball of the innings as the opener holed out to deep mid-wicket, kept losing wickets at regular intervals as the top-order caved in.

Only skipper Virat Kohli kept up the fight, making 85 off 61 deliveries. At one point in time, it seemed that Kohli and Hardik Pandya would tilt the game in India’s favour as they took 20 runs in the 16th over and 13 runs in the 17th over to bring the equation down to 43 off 18 balls.

Swepson was the star for Australia picking three for 23 in his four overs. He removed Shikhar Dhawan (28 off 21), Sanju Samson (10 off 9) and Shreyas Iyer (first-ball duck).

Put into bat, Australia didn’t have a great start as they lost skipper Aaron Finch in the second over. Finch was caught by Hardik Pandya at mid-off off Washington Sundar and went back to the pavilion without troubling the scorers.

2020-12-08
Editor in chief
Previous: BMC & BDA have initiated the process to make ‘Ekamra Kshetra’ beggar-free on a priority basis
Next: Bharat Bandh: Normal life came to a grinding halt here in Odisha