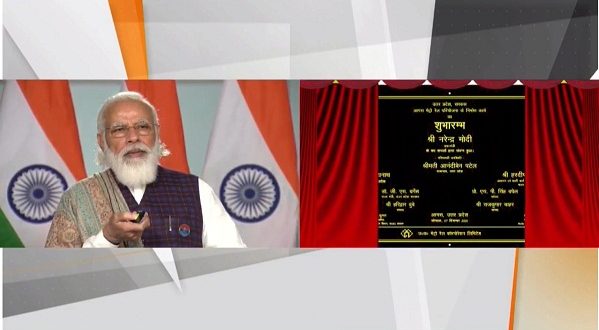 Speaking on the occasion, the Prime Minister pointed out that one of the major problems of the country’s infrastructure sector has been that new projects were announced, but not much attention was given to where the money would come from. He added that his government has ensured the necessary funds at the start of the new projects itself.

The Prime Minister said that more than Rs 100 lakh crore will be spent under the National Infrastructure Pipeline Project. Work is also being done on the Multi-modal Connectivity Infrastructure Master Plan. He added that efforts are on to attract investment from all over the world to improve the country’s infrastructure.

Terming tourism as a sector in which there are means of earning for everyone, the Prime Minister informed not only has the government increased the number of countries covered under the e-Visa scheme, it has also reduced the tax on hotel room tariff significantly. Efforts are also being made to attract tourists through schemes like Swadesh Darshan and Prasad, he added. With the efforts of the government, India is now ranked at number 34 in Travel and Tourism Competitiveness Index. In 2013, India was ranked 65th in this index. He hoped  as the situation in Corona continues to improve, soon the charm of the tourism sector will also return.

The Prime Minister said reforms are now being carried out in a wholesome manner rather than in piecemeal manner.  He remarked that for the development of cities work has been done at 4 levels-  Resolution of long standing problems, Ease of living, Maximum investment, More use of modern technology.

The Prime Minister said there was a trust-gap between the builders and the home buyers. He said people with some wrong intentions brought disrepute to the entire real estate sector, upsetting our middle class. He said RERA’s law was introduced to remove this problem. He added, some recent reports show that after this law, middle class homes started getting completed quickly. He said all-round development from modern public transport to housing is going on to make life in cities easier.

The Prime Minister said Pradhan Mantri Awas Yojana was inaugurated from Agra and under this scheme more than 1 crore houses have been approved for the urban poor. For the middle class of the city, help is being provided to buy houses for the first time. He said so far, more than 12 lakh urban middle class families have been given help of about Rs 28000 crores to buy houses. He said Infrastructure like water, sewer are being upgraded in several cities under AMRUT mission and help is being given to local bodies to make public toilets better in cities and to implement a modern system of waste management.

The Prime Minister informed that post 2014  450 km metro line has been operationalized as compared to mere 225 km before that. He also informed that work on the 1000 km long metro lines is progressing expeditiously. This work is on in 27 cities of the county.

The Agra Metro project comprises 2 corridors with a total length of 29.4 km and connects major tourist attractions like Taj Mahal, Agra Fort, Sikandra with railway stations and bus stands. The project will benefit the 26 lakh population of the city of Agra and will also cater to more than 60 lakh tourists who visit Agra every year. It will provide an environment-friendly Mass Rapid Transit System to the historic city of Agra. The estimated cost of the project will be Rs 8,379.62 cr which will be completed in 5 years.

Earlier, on 8th March 2019, Prime Minister inaugurated the Agra Metro project along with the commencement of commercial operations of Lucknow Metro on the entire 23 km long North-South corridor from ‘CCS Airport to Munshipulia’.

2020-12-07
Editor in chief
Previous: Armed Forces Flag Day being celebrated across country
Next: Odisha government has decided to close all government offices on Tuesday on account of country-wide shutdown