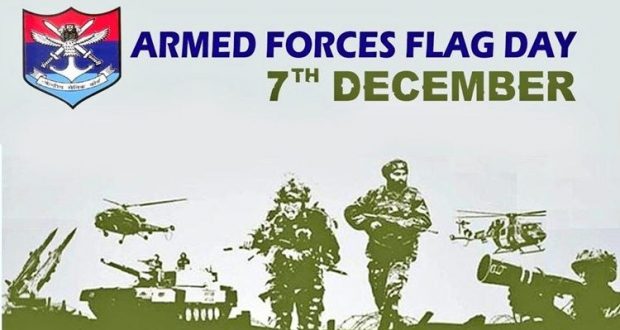 in National December 7, 2020 Comments Off on Armed Forces Flag Day being celebrated across country 231 Views

NEWDELHI:7/1`2/20Today, Vice President M Venkaiah Naidu has called upon everyone to collectively show their gratitude to the martyrs, disabled soldiers, and their families by voluntarily contributing towards Armed Forces Flag Day Fund.

In a tweet, Mr Naidu said, our soldiers are the guardians of the nation and make many sacrifices to protect the citizens.

He said, let us all salute and support our gallant soldiers for their valour and patriotism.

Extending his greetings on the occasion of Armed Forces Flag Day today, Prime Minister Narendra Modi said that the day marks a special occasion to express gratitude to our armed forces and their families. He said India is proud of their heroic service and selfless sacrifice.

Prime Minister urged everyone to contribute towards the welfare of our forces. He said this gesture will help many of our brave personnel and their families.

Armed Forces Flag Day is observed every year on 7th December since 1949 to honour the soldiers, sailors, airmen of our country.
Citizens can contribute generously to the cause of supporting the valiant men in uniform defending our borders by visiting the website ksb.gov.in. Contributions to Armed Forces Flag Day Fund are exempted from Income Tax under section 80 G of the Income Tax Act, 1961.

Union Information and Broadcasting Minister Prakash Javadekar have also urged everyone to contribute to the Armed Forces Flag Day Fund for the welfare of the families of our martyrs and soldiers who bravely fight on our borders to protect the honor of the country.
Mizoram Governor P.S. Sreedharan Pillai has appealed to all individuals, businessmen, and government employees to donate generously to the welfare of the service personnel on the occasion of Armed Forces Flag Day today. Mr. Pillai said a fund collection drive has been launched throughout the state in view of the Armed Force Flag Day.

In a message, Governor Pillai hailed the armed forces and paid rich tribute to the valiant heroes of the Armed Forces, who sacrificed their lives in protecting the country from the enemies at the border and hinterland.

Mr Pillai also hailed the people of Mizoram for their contribution towards the unity, integrity, and sovereignty of the country. He said, at least three former chief ministers of the state were in the defence service and paid respect to them.

He said that the funds being collected on the Armed Forces Flag Day help in the rehabilitation of the families and the disabled soldiers so that they lead their life of dignity.