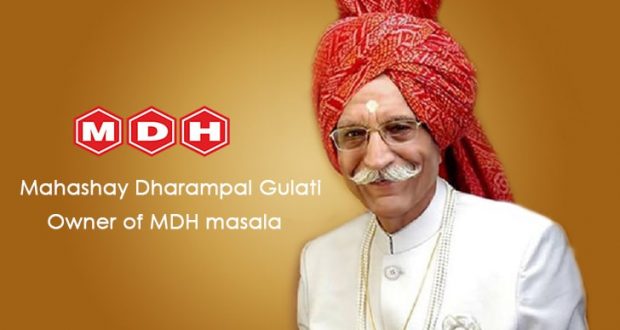 in Business, National December 3, 2020 Comments Off on MDH Owner And Grand Old Man of India’s TV Commercial–Dies at 98 879 Views

New Delhi:3/12/20: ‘Mahashay’ Dharampal Gulati, the owner of the iconic spice brand MDH, on Thursday died at the age of 98. As per reports, Gulati breathed his last at Mata Chanan Devi Hospital in Delhi after suffering a cardiac arrest. He had been undergoing treatment at the hospital for the last three weeks.

Who was ‘Mahashay’ Dharampal Gulati?

Dharampal Gulati was a well-known figure and was fondly called ‘dadaji’ and ‘Mahashayji’. He was born in Sialkot, Pakistan, in 1923. However, he later moved to India following Partition. He stayed at a refugee camp in Amritsar before moving to Delhi.

He made a humble beginning by opening a spice shop in Delhi’s Karol Bagh before building his empire. He established MDH in 1959.

The company made its mark not only in India but in foreign countries as well, including the UK, Europe, UAE, Canada.

Gulati was also honored with the Padma Bhushan, the third-highest civilian award in the country, in 2019.

Many of us might remember his smiling face in various advertisements of MDH masala with that iconic jingle “Asli masala sach sach”.

Condolences Pour in From Political Circle

Defence Minister Rajnath Singh took to Twitter to condole ‘Mahashay’ Gulati’s death and remembered how he made his mark in the country. “I feel saddened by the passing away of one of India’s most respected businessmen, ‘Mahashay’ Dharampalj. He started his small business and made a mark of himself. He was very active in social work and remained active till the last moment. I express my condolences to his family.”Delhi Chief Minister Arvind Kejriwal also condoled the demise of the MDH Owner. “Dharm Pal ji was very inspiring personality. He dedicated his life for the society. God bless his soul,” he tweeted. His deputy Manish Sisodia said, “India’s most inspiring entrepreneur, MDH owner Dharm Pal Mahashay passed away this morning. I have never met such an inspiring and lively soul. May his soul rest in peace.” 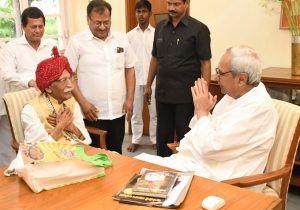 Paying tribute to the departed soul, Patnaik said Gulati Ji was a shining beacon of India’s entrepreneurial journey who turned MDH Spices into an iconic brand. He will always be remembered for his philanthropic work, the CM tweeted.

2020-12-03
Editor in chief
Previous: IIT Bhubaneswar to Hold its 9th Annual Convocation Live by Hybrid Mode
Next: CBSE To Conduct Class 10, 12 Board Exams In Written Mode Only