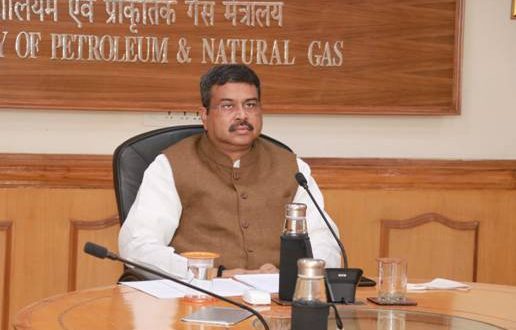 New Delhi:2/12/20: Minister of Petroleum & Natural Gas and Steel Shri Dharmendra Pradhan has said that India is all for reasonable and responsive pricing of crude. Speaking at Swarajya Webinar Event on Aatmanirbhar Bharat today, he said that gone are the days of monopoly, and the producers should take into account the consumers’ viewpoint also. The Minister said that India is currently using only 6% of the world’s primary energy and the per capita consumption of energy is still one-third of the global average. But, this is rapidly changing. India will drive the growth in global energy demand as its energy consumption is projected to grow at 3 percent per annum up to 2040, faster than all major economies of the world. India’s share of total global primary energy demand is set to roughly double to about 11% by 2040, driven by strong economic development.

Shri Pradhan said that Hon’ble Prime Minister Shri Narendra Modi has envisioned a clear roadmap for India’s energy justice, which rests on five key enablers of energy availability and accessibility to all, energy affordability to the poorest of the poor, energy efficiency, energy sustainability and energy security. He said that Prime Minister has highlighted seven key drivers of India’s energy strategy going forward.  “Apart from achieving the renewable energy target of 450 gigawatts by 2030, India will focus on developing in an integrated manner a gas-based economy, cleaner use of fossil fuels, greater reliance on domestic fuels to drive biofuels, increasing the contribution of electricity, moving into emerging fuels, like hydrogen and promoting digital innovation across all energy systems. Our energy agenda is inclusive, market-based and climate-sensitive. We have adopted multiple pathways for the energy transition.”, he added.

Shri Pradhan said that we have successfully transitioned to Bharat – VI emission norms since April 2020. This initiative is part of our effort in curbing emissions in the road transport sector, which in turn will lead to better air quality for citizens across the country. He talked about the National Biofuel Policy (NBP), 2018 to promote biofuels on a mass scale, with a target of 20% ethanol blending in petrol and 5% of bio-diesel by 2030. The Minister informed that the ethanol-blending percentage has risen from 0.67% in 2012-13 to now 6%. Twelve 2G Ethanol Bio-Refineries in 11 States are being set up with an overall capacity of 1100 kiloliter per day (KLPD). He said that we are also working towards conversion of Used Cooking Oil to Biodiesel in select cities.

The Minister said that in the oil & gas sector, we see open spaces for Start –Up in both within the existing domain of oil & gas as well as upcoming areas like Fuel Cells, Solar Energy, Hydrogen, Alternative Sources of Energy, Electric Vehicles, etc. he announced that currently about 175 Start Ups are at various stages of incubation under Oil & Gas PSUs with allocated fund of Rs 200 Cr to Selected Start-Ups, which is 62.5 % of pledged fund committed during Start Up Sangam. Incubation and mentoring support to Start-ups is provided thru’ Tie-ups with educational / professional institutions like IITs / IIMs / NITs / established startup hubs. Oil & Gas PSUs have further committed ~ Rs 300 Cr for next three years period.