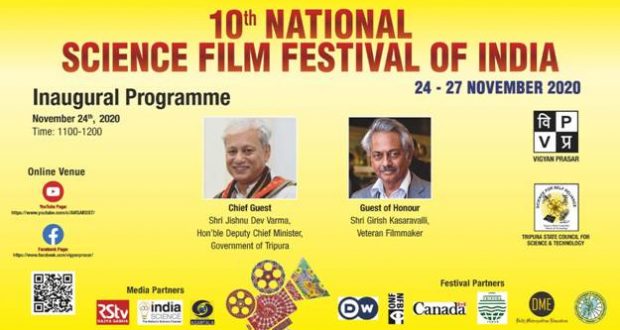 Newdelhi:24/11/20 :The tenth edition of prestigious science film festival got off in a virtual mode. VigyanPrasar, an autonomous agency under the Department of Science and Technology, Govt. of India, has been organizing this festival as a part of its science popularization endeavour. The festival offers a unique platform to showcase the science films made by professionals, amateur and student filmmakers under various themes.

The four-day long film festival was inaugurated by Deputy Chief Minister of Tripura JishnuDevVerma on Tuesday.In his inaugural address JishnuDevVarma, said “Films being the most popular medium of communication, can help popularize science effectively, as people directly connect with them. Science is wedded to art; film is a complete medium.It has science, art and culture and thus offers a complete package.  In India we cannot separate science from art as the art-forms are based on science.” He further said that Northeast India in general and Tripura in particular, is known for its indigenous culture and rich biodiversity. “The initiative to take science to the common people through films in the region is commendable. It will help in the development of scientific temper among the people of this region”, the deputy chief minister observed. The national science film festival 2020 is being jointly by organized Vigyan Prasar, and the Tripura State Council of Science and Technology, Govt. of Tripura. A total of 372 films in different languages have been received for participation in the festival this year.

A total of 115 shortlisted films selected by the ten-member jury will be screened during the festival. These include films in Hindi, English, Urdu, Malayalam, Kashmiri, Bengali, Marathi, Punjabi and Tamil languages. Science and technology, environment, agriculture, renewable energy, water management, health and drugs and technological innovations are some of the most explored themes in the submitted films. The entries include documentaries, biography, short films, docu-dramas, science fiction and animation films.These films have been made by different institutions, professional, amateur and student filmmakers to compete under specific categories. The festival was earlier scheduled to take place between 18-22 March’20 in Agartala. The event had to be postponed due to the unfolding pandemic situation.

Dr Nakul Parashar, Director, Vigyan Prasar said that in its journey of three decades, VigyanPrasar has made tremendous efforts to connect with people through variousmedia. Science film festival has been an important part of this journey. “As the program is happening in such a time where everyone is looking towards science to get out of this pandemic, I am hopeful that the next film festival will happen in person”, observed Dr Parashar.

The national science film festival receives entries in the form of government funded films as well as films made by independent filmmakers, media institutes, college, universities, and school students. In addition to the screening of films, this virtual festival will also have thematic panel discussions and dedicated sessions on topics such as science, media, and filming craft and techniques.  The names of outstanding science films to be awarded will be announced on the 27th of November, the last day of the event.

“I am thankful to the Tripura state council that has helped us in many a way to conduct this program. I hope that these science films will be appreciated by massesin a far greater number this year, for their easy accessibility online. The festival will go a long way to motivate and facilitate more filmmakers to make science films and help inculcate scientific temper among the people of India” said NimishKapoor, the convenor of the festival. Festival’s programme schedule and other useful information can be found on VigyanPrasar’swebsite. 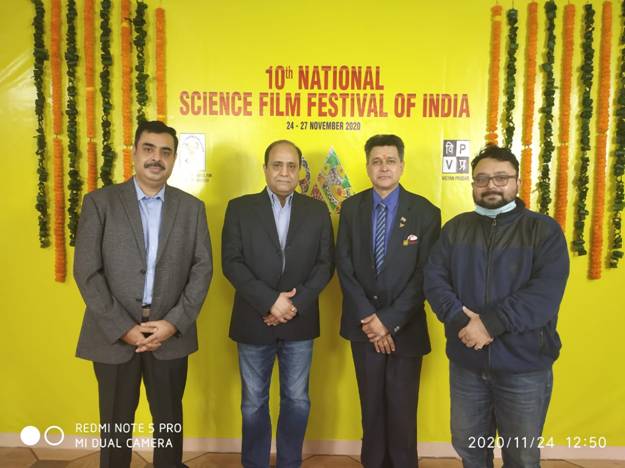