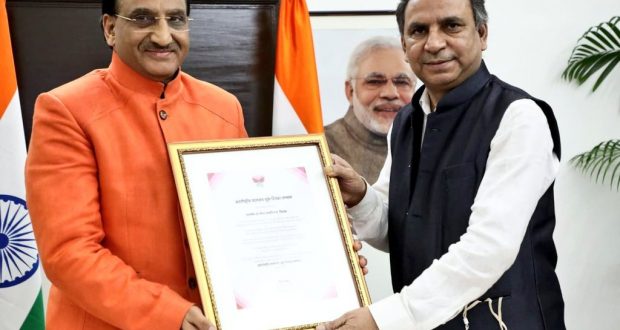 Expressing gratitude to Vatayan UK for the award, Shri Pokhriyal highlighted that Unity in diversity is the hallmark of India and the languages have special importance in our culture.  Culture and language are linked with each other, as the language becomes stronger, so does the culture and civilization. Similarly, the writing also strengthens the civilization and culture of the country.

The Minister highlighted that literature is our cultural, spiritual, educational heritage which invisibly strengthens the country. He credited every person who is associated with literature, be it a writer, poet, musician, painter, for the recognition of Indian knowledge tradition in the world.

He stated that the Vatayan Samman is the recognition for not only his writings and literature but also for Indian values and tradition. He said his writings are related to his experiences, struggles, life values and ideals. His writings have always given expression to the poor, to the oppressed and all his songs are dedicated to Indian life values, Indianness and nationality, he added.

Shri Pokhriyal highlighted that the New Education Policy -2020, envisioned under Prime Minister Narendra Modi, has placed language and culture at the center and an attempt has been made to connect the children with the mother tongue. He hoped that through this policy youth will be able to reach greater heights in their career.

Vice Chairman of the Central Hindi Board-Agra and an eminent author Anil Sharma Joshi said, besides that Shri Pokhriyal is lauded for his role in shaping the New Education Policy-2020, he is basically a poet, who has penned over 75 books on many genres, widely translated and well researched. In the world of political competition, keeping a poet’s mind alive speaks of his amazing creativity, he added.

This award is the another in the list of many other national and international awards and honours conferred to the Minister for writing, poetry and other literary works. Shri Pokhriyal has earlier received several awards in the field of literature and administration including Sahitya Bharati Award by the then Prime Minister Shri Atal Bihari Vajpayee, Sahitya Gaurav Samman by Former President Dr. A.P.J. Abdul Kalam, Bharat Gaurav Samman, Good Governance Award by Dubai Government, outstanding Achievement Award by Global Organization of Person of Indian Origin by Mauritius, awarded in Ukraine in the area of environmental protection, among others. Shri Nishank is also honoured with “Himal Gaurav Samman” by Nepal.

The German version ‘nureinWunsch” of Shri Nishank’s story collection ‘Just a Desire’, is published in Afro Asian Institute, Hamburg. His ‘Sparsh Ganga’ initiative was included in Mauritius school curriculum. He is actively associated with various social activities such as unique drive of `Swaran Ganga. Shri Pokhriyal has also organised Cultural Programmes worldwide as a Minister of Culture in Uttar Pradesh.

Shri Pokhriyal has an honorary doctoral degree, D.Litt in the field of literature by Graphic Era, Deemed to be University, Uttarakhand.

Shri Pokhriyal has penned more than 75 books on wide-ranging issues, which have also been translated into many national and foreign languages. Under the able leadership of Prime Minister Shri Narendra Modi, the Minister has steered the National Education Policy through different processes, which has received worldwide acclaim.

Vatayan International Awards given by the Vatayan-UK organization in London honors poets, writers, and artists for their exemplary work in their respective fields. Earlier many eminent personalities like Prasoon Joshi, Javed Akhtar have been awarded the Vatayan Awards for their literary contribution.

The programme was broadcast live on the Facebook of Vaishvik Hindi Parivar, eminent Hindi scholars, artists, and media personnel from around the world, were present.

2020-11-22
Editor in chief
Previous: TRILATERAL MARITIME EXERCISE SITMEX-20 IN ANDAMAN SEA
Next: Cyclonic Storm Over Bay Of Bengal Likely during the next 24 hours