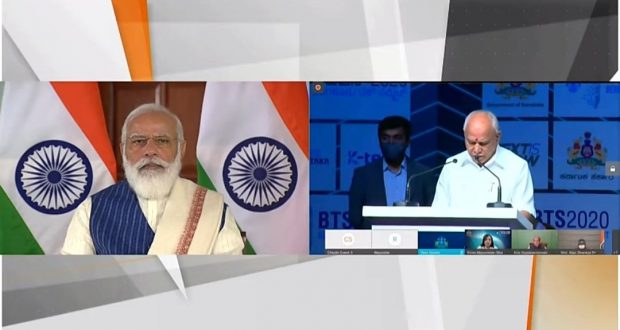 Newdelhi:19/11/20:Prime Minister Shri Narendra Modi inaugurated Tech Summit in Bengaluru today via video conference. The summit is organised by the Government of Karnataka along with Karnataka Innovation and Technology Society (KITS), Karnataka government’s Vision Group on Information Technology, Biotechnology & StartUp, Software Technology Parks of India (STPI), and MM Activ Sci-Tech Communications. The theme of this year’s summit is “Next is Now”. Shri Ravi Shankar Prasad, Union Minister of Electronics & IT, Communications and Law & Justice, and Chief Minister of Karnataka  Shri BS Yeddyrupa  were present on the occasion.

The Prime Minister expressed happiness that today Digital India is no longer being seen as any regular Government initiative rather it has become a way of life particularly, for the poor, marginalised, and for those in Government.

Addressing the Tech Summit, the Prime Minister said due to Digital India, our nation has witnessed a more human-centric approach to development. He said using technology on such a large scale has brought about several changes for the citizens and the benefits are clearly visible. He said the government has not only created a market for digital and tech solutions but also made it a key part of all schemes. He added his governance model is a technology first and through technology human dignity has been enhanced like crores of farmers receiving monetary support in one click and successfully operating the world’s largest healthcare scheme, Ayushman Bharat. He stressed that technology ensured India’s poor received proper & quick assistance even at the peak of the lockdown. He said the scale of this relief has few parallels.

The Prime Minister stressed that a framework-level mindset has the potential to build an eco-system of multiple successful products. He listed out the initiatives with a framework-level mindset like UPI, National Digital Health Mission, Swamitva Scheme, etc. He said technology is setting the pace for the defense sector to evolve. He stressed the need for data protection as well as cybersecurity with the rapid increase of tech use.  He proposed the youth can play a big role in devising robust cybersecurity solutions that can effectively vaccinate digital products against cyber attacks and viruses.

The Prime Minister said the scope and need for innovation are relevant in the fields of science like bio-sciences, engineering, etc. He said Innovation is the key to progress and India has a clear advantage when it comes to innovation because of the talent of our youth and their zeal to innovate. He added the potential of our youth and the possibilities of technology are endless. It is time, we g