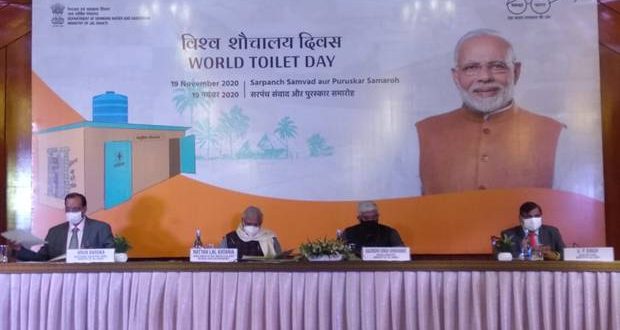 Newdelhi:19/11/20:Union Minister for Jal Shakti, Shri Gajendra Singh Shekhawat and the Minister of State, Jal Shakti, Shri Rattan Lal Kataria conferred the Swachhata Awards 2020 on the 20 best performing districts for making significant contribution towards ODF Sustainability and ODF Plus goals on the occasion of World Toilet Day today. These awards were given at a virtual ceremony organized by Department of Drinking Water and Sanitation (DDWS), Ministry of Jal Shakti and saw the online participation by Central, State and District SBMG officials.

In his address, Union Minister Shri Gajendra Singh Shekhawat said that the SBMG has transformed rural India by manifesting into a Jan Andolan for sanitation under guidance and leadership of Prime Minister, Shri Narendra Modi achieving Open Defecation Free (ODF) rural India milestone in mission mode, in a span of five years.

Speaking on the occasion Minister of State Shri Rattan Lal Kataria applauded the efforts of all stakeholders associated with SBM for making it a remarkable journey since 2014 and world’s largest behavior change programme. He congratulated the awardees for making significant contribution in improving sanitation and cleanliness standards in their villages and urged everyone to continue working with same spirit in SBM Phase 2 as well which focuses on the bigger goal of ODF Plus.

Shri U P Singh, Secretary, DDWS, Ministry of Jal Shakti complimented all the states’ SBMG teams for making significant contribution in Phase 1 of SBMG and stressed that goals outlined under Phase 2 are more important for sustaining toilet usage and comprehensive cleanliness. He stressed on the resolve and commitment to attain ODF Plus status for all the villages in mission mode under Phase 2. At the same time, he pointed out at the challenge to sustain the Phase 1 gains.