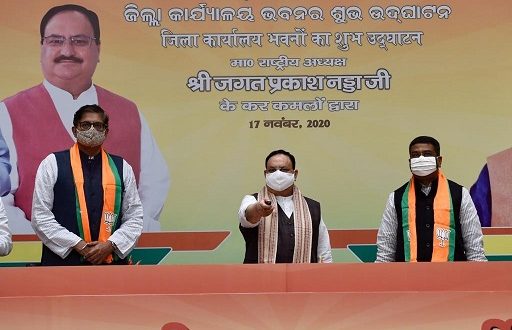 Newdelhi:17/11/20 The prospects of the Bharatiya Janata Party (BJP) to form government in Odisha is very high as the party workers are working hard to achieve the mission, said party’s national president JP Nadda.While speaking on the sidelines of the virtual inauguration of six new district party offices in Odisha on Tuesday, Nadda congratulated the workers for their contribution which helped the party perform well in past elections in the State.

“Out of 33 tribal (Assembly) seats in Odisha, the party has won in 11 constituencies and the vote share has increased to 38 % compared to 21 % in 2014. In the Assembly elections, the vote share of the party which was 18 % in 2014 has climbed to 32 % in the last elections. I congratulate the BJP unit in Odisha for this feat,” said Nadda.

Nadda further urged the workers to work with enthusiasm as they are very close to accomplice their mission. “I can see BJP will form government in Odisha soon. We will strengthen the party with our ideology and PM Modi’s vision to develop the State,” he said.

The BJP National President also took a dig at the Odisha government for not implementing the Ayushman Bharat Yojana. 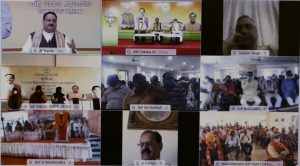 “It is our vision to ensure that there is all round development in Odisha. When I was the health minister, I wanted to implement the Ayushman Bharat Yojna in Odisha. But unfortunately it could not materialise. I urge the Odisha government to implement the scheme which will benefit poor people in the State,” said Nadda.

Stating that the Centre under PM Narendra Modi wants to see Odisha as a developed State, he said already six medical colleges and other developmental projects including the coastal highway and other railway projects are being executed in the State.

It is pertinent to mention here that Nadda inaugurated six Karyalayas (party offices) of the party in Dhenkanal, Keonjhar, Baripada, Sundergarh, Bargarh and Angul via video conferencing today.

“Six more office buildings will also come up in different parts of the State in the coming days. Such buildings help us to connect with people. There are several offices that run from houses of leaders, and those parties turn into family-based parties. However, the party becomes family whenever it functions from such institutions,” said Nadda while taking a veiled dig at the Congress party.

There is a difference between an office and Karyalaya as the latter functions round-the-clock throughout the year. The informal training of our workers begins from here, he added.

2020-11-17
Editor in chief
Previous: Odisha Chief Minister announced a Rs 100 crore package for the development of the ‘Swabhiman Anchal’
Next: Two newly-elected MLAs of Tirtol and Balasore Sadar will be sworn in tomorrow