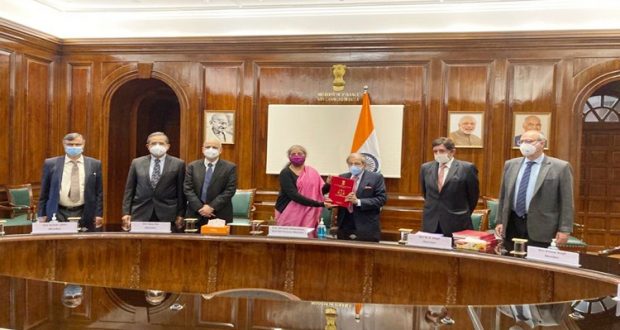 in National November 17, 2020 Comments Off on 15th Finance Commission presents its report to Finance Minister 278 Views

Newdelhi:17/11/20:The Fifteenth Finance Commission today presented a copy of its report to Finance Minister Nirmala Sitharaman. The report titled ‘Finance Commission in COVID Times’ deals with the ratio in which the taxes are to be divided between the Centre and States in the upcoming next five years. The report will be tabled in the Parliament by the Finance Minister along with an Action Taken Report of the government.

The report has been finalized after wide-ranging consultations with the Union and State Governments, local governments, Chairmen and Members of previous Finance Commissions, Advisory Council to the Commission and other domain experts, academic institutions of eminence, and multilateral institutions.

This Report has been organized in four volumes. Volume-I and II contain the main report, whereas Volume- III is devoted to the Union Government which examines the medium-term challenges and the roadmap ahead. Volume-IV is entirely devoted to the states.

The Commission has analysed the finances of each state in great depth and has come up with state-specific considerations to address the key challenges that individual states face.