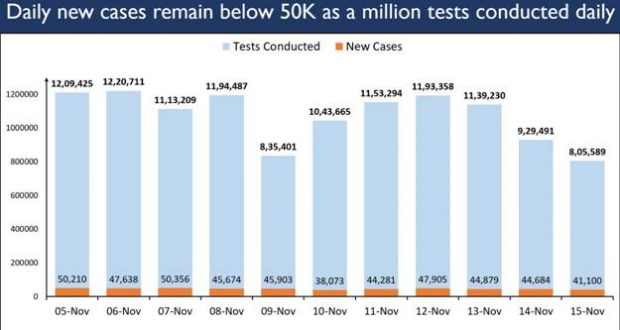 in National November 15, 2020 Comments Off on India reports less than 50K New Daily Cases since the last 8 days 289 Views

Newdelhi:15/11/20:India has reported less than 50,000 new daily cases for the eight continuous days. In the last 24 hours, only 41,100 persons were found to be infected with COVID in India. Daily New Cases last crossed the 50K threshold on 7th November. Apart from the successful dissemination of COVID Appropriate Behaviour among the varied population groups, this trend assumes wider significance as many countries in Europe and America continue to see a surge in their daily numbers.

In the last 24 hours, India also registered 42,156 new recoveries which have led to a further contraction of the Active Caseload. India’s present active caseload of 4,79,216 consists of just 5.44% of India’s Total Positive Cases. New Recoveries outnumbering New Cases every 24-hour cycle has also improved the Recovery Rate to 93.09% today. The total recovered cases stand at 82,05,728. The gap between Recovered cases and Active cases that is steadily increasing presently stands at 77,26,512.

79.91% of the new recovered cases are contributed by ten States/UTs. Ten States/UTs have contributed 82.87% of the new cases. 23.5% of new fatalities reported are from Maharashtra which reported 105 deaths. Delhi and West Bengal follow with 96 and 53 new deaths, respectively. 21 States/UTs have death per million lower than National Average of 94. 2020-11-15
Editor in chief
Previous: Odisha tested positive for COVID-19 in the last 24 hours taking the total caseload to 3,07,906.
Next: Nitish Kumar to take oath as next Chief Minister of Bihar tomorrow