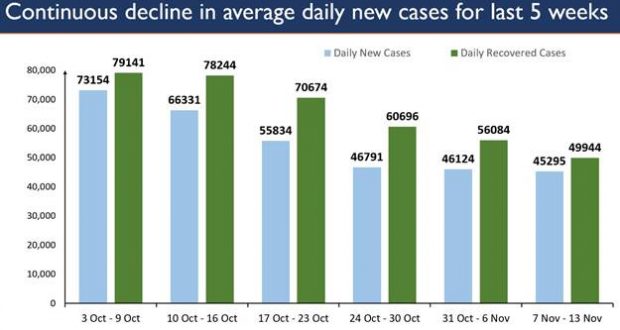 Newdelhi:14/11/20:Registering a four-day streak of less than 5 lakh active cases, India’s active caseload has shrunk to 4,80,719 as on date. The share of Active Cases in the total Positive Cases has further decreased to 5.48%.

The trend of new recoveries exceeding new cases every day continues continuously as 44,684 new cases were reported in the last 24 hours against 47,992 recoveries.

New cases continue their downward slope indicating the adoption of COVID Appropriate Behaviour among the population, and effective containment measures by the State/UT governments following guidelines of the Union Government. The daily new cases on an average show a declining trend over the last five weeks. 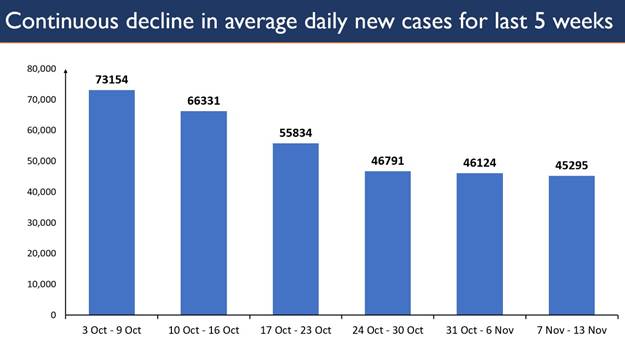 This trend has also upended the Recovery Rate to cross 93% today. The cumulative national figure is 93.05%. The total recovered cases stand at 81,63,572. The gap between the recovered cases and active cases is steadily increasing, presently standing at 76,82,853. 75.38% of the new recovered cases are contributed by ten States/UTs.

With 6,498 persons recovering from COVID, Delhi saw the most recoveries in the past 24 hours. Kerala saw 6,201 daily recoveries while Maharashtra saw 4,543 new recoveries. 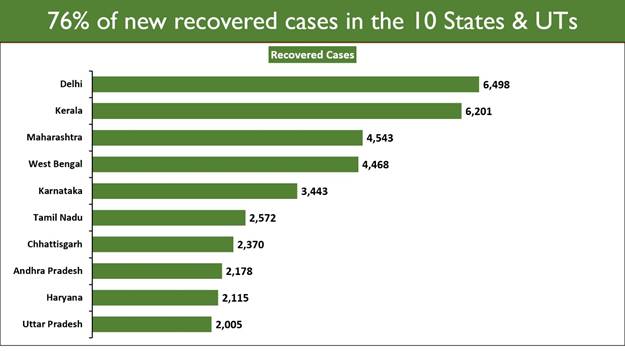 Ten States/UTs have contributed 76.38% of the new cases. 24.4% of new fatalities reported are from Maharashtra which reported 127 deaths. Delhi and West Bengal follow with 91 and 51 new deaths, respectively.