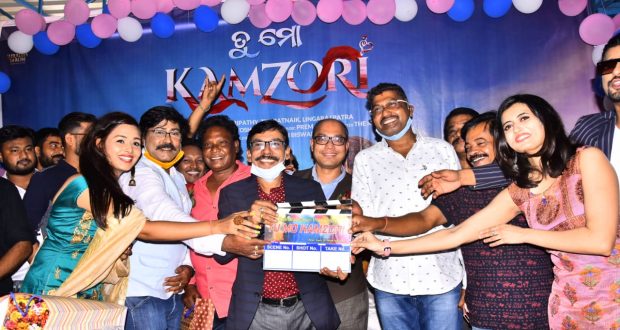 in Odia Cinema November 13, 2020 Comments Off on Mahurat of the upcoming Odia film” Tu Mo Kamzori” was held at Sai Temple near Patia 1,046 Views

Bhubaneswar:13/11/20: The mahurat of the upcoming Odia film Tu Mo Kamzori was held at Sai Temple near Patia here. In the musical love story, Rakesh Deo, Anubha Sourya, and Lipika will come together to entertain the audience. Dev, Asish, Somu, Barsha, Jyoti, Natia, and Jojo has comprises the rest of the cast.

The film is produced under the banner of Shradha Saburi Production in association with Supreme Entertainment. Produced By Bargabi Tripathy, Tiki Patnaik and Lingaraj Patra, the screenplay and direction of the film is by Santosh Biswal. While the story is penned by Asutosh Tripathy, the dialogues have been written by Nirmal Nayak. Prem Anand has scored the music for the film. The lyrics penned by Basantraj Samal, Nirmal Nayak, and Subrat Swain. Singers Humane Sagar, Ananya Sritam Nanda, Diptirekha Padhi along with Asutosh, Sabisesh, and Debabrata have lent voice to the songs.

The Director of Photography (DOP) of the film is Kanhu Nanda Subham, the film will be edited by Ranjan Khatei while the Art director is Pandia. Choreography is by Rakesh Deo while the publicity is done by  ‘Best Ideas’.

2020-11-13
Editor in chief
Previous: As many as 1,610 schools in 25 districts of Odisha have joined in the ‘Mo School’ campaign.
Next: PM spends Diwali with soldiers in forward areas