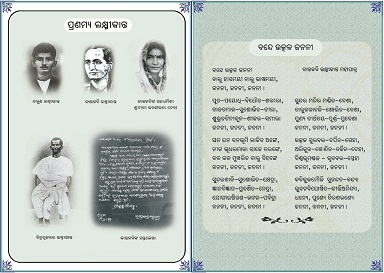 Bhubaneswar:13/11/20: Students in schools will learn and sing ‘Bande Utkal Janani’ as the Odisha government has decided to include the State anthem in the syllabus.

In a tweet, the Information and Public Relation (I&PR) Department informed that the government has issued a notification to include patriotic song, ‘Bande Utkal Janani’, in the courses for standard 9 and 10 in schools.

Following the development, family members of the late Kantakabi Laxmikant Mohapatra who had authored the song have expressed their pleasure and gratitude.

“Personally I am happy with the decision as the late Kantakabi Laxmikant Mohapatra is my grandfather. He was not only a member of my family but every Odia household. The school students should know and learn their State anthem. The step taken by the State government is historical, “Prabhukalyan Mohapatra, grandson of the famous poet said.

The Chief Minister had also earlier announced that the song would be included in the school syllabus while the song was accorded the State anthem tag officially, Mohapatra added.

There was a long-standing demand from various sections to make it State anthem ever since the Odisha Assembly resolved to sing the song at the culmination of every session.

In May this year, thousands of people had sung the song collectively to encourage the front-line workers fighting Covid-19 on a call by the Chief Minister.

The State Cabinet had accorded the poem the State anthem status in June this year.

Bande Utkala Janani was immortalised when it was sung after Odisha became a separate State in 1936.

2020-11-13
Editor in chief
Previous: RTPCR test of all MLAs will be conducted for winter session of Odisha Assembly
Next: Bhubaneswar Municipal Corporation authorities have banned special rituals including ‘Paya Shraddha’