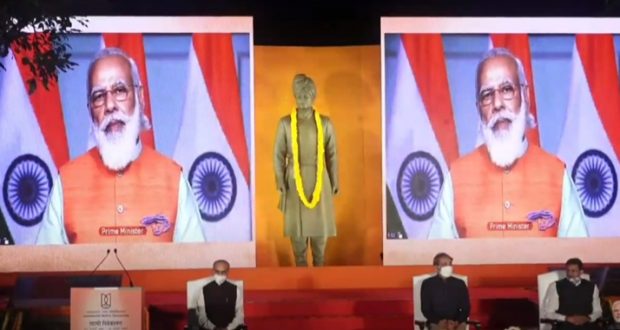 in National November 12, 2020 Comments Off on PM unveils statue of Swami Vivekananda at JNU Campus 319 Views

Addressing the JNU students and the youth of the country, the Prime Minister expressed his views on the harms of prioritizing ideology over national interest. He said this is one thing that has done great harm to the democratic system of our country. “Because my ideology says this, so in matters of national interest, I will think in the same framework, I will work on the same parameter, this is wrong”, said Shri Modi. It is natural to be proud of one’s ideology still, on the subjects of national interest, our ideology should be seen standing with the nation not against it, he stressed.

The Prime Minister told the students that in the history of the country, whenever a difficult time arose before the country, people of every ideology came together in the national interest. People of every ideology stood united under the leadership of Mahatma Gandhi in the freedom struggle. They fought for the country together. The country saw the same solidarity during the Emergency. Former Congress leaders and activists were also present in the movement against the Emergency. There were RSS volunteers and Jana Sangh people. Socialists and communists too came together.

Prime Minister Modi stressed that in this solidarity, no one had to compromise on ideology. There was only one purpose – national interest. Therefore, whenever there is a question of national unity, integrity, and national interest, making decisions under the burden of any ideology will lead to the loss of the nation.

The Prime Minister made it clear that idea-sharing and the flow of new ideas need to be kept uninterrupted. Our country is the land where seeds of different intellectual ideas have sprouted and thrived. It is necessary for the youth to strengthen this tradition. Due to this tradition, India is the most vibrant democracy in the world, Shri Modi said.

The Prime Minister wished that Swami ji’s statue in JNU would inspire everyone and give courage, which Swami Vivekananda wanted to see in every person. He added this statue would teach compassion, which is the mainstay of Swamiji’s philosophy. He wished this statue would teach us an immense dedication to the nation, teach intense love for our country which is the prime message of Swamiji’s life. He wished the statue to inspire the nation for the vision of oneness and to move forward with the vision of youth-led development, which has been the expectation of Swamiji. He wished the statue would continue to inspire us to realize Swamiji’s dream of a strong and prosperous India.

2020-11-12
Editor in chief
Previous: Construction of attires for the much-awaited Nagarjuna Besha of Lord Jagannath is undergoing at full speed
Next: A new Scheme “Aatmanirbhar Bharat Rozgar Yojana” launched