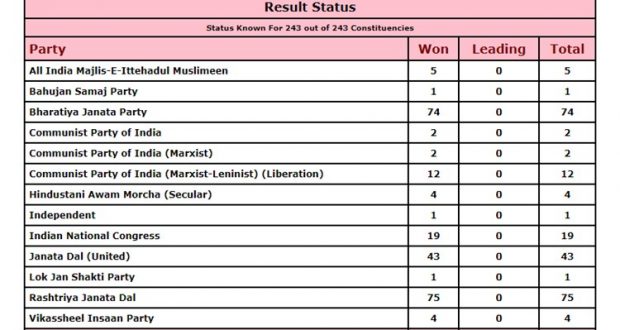 New Delhi:11/11/20: The ruling National Democratic Alliance (NDA) has retained power in Bihar. It has secured an absolute majority in 243 member assembly.

NDA got 125 seats, while the opposition Grand Alliance got 110 seats. Others got 8 seats.

Asaduddin Owaisi led AIMIM got 5 seats. LJP, BSP and Independent got one seat each.

2020-11-11
Editor in chief
Previous: Mo bus, the beloved city bus service of Capital Region has won the top award of the country for the second time
Next: US President- Joe Biden set out blueprints for his Transition Covid-19 Advisory Board