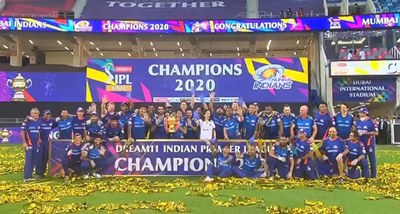 Trent Boult was named Player of the Match. With this win, Mumbai added a fifth IPL title to their kitty, more than any other team in the 13-year history of the league.

Chasing 157 to win, Mumbai got 33 off the first three overs as Quinton de Kock tore into the Delhi bowlers.

He was dismissed by Marcus Stoinis but Rohit carried on to hit a match-defining fifty and stitched crucial partnerships with de Kock (20), Suryakumar Yadav (19) and Ishan Kishan (33 not out) to keep Mumbai in control.

Earlier, a magnificent half-century by Rishabh Pant (56 off 38 balls) and a gutsy fifty by skipper Shreyas Iyer (65 not out) helped Delhi Capitals post 156 runs after witnessing a disastrous start against Mumbai Indians. Iyer brought up his 500 runs and smashed his third half-century in this year’s IPL.