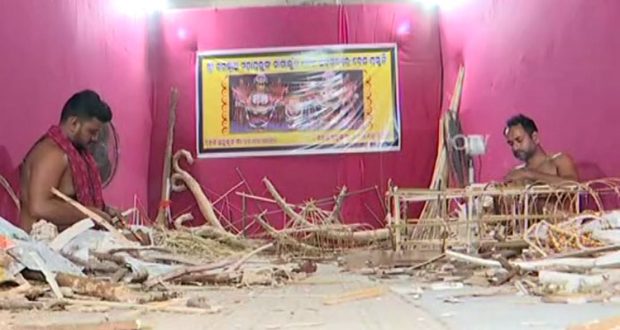 in State News November 11, 2020 Comments Off on Construction of attires for the much-awaited Nagarjuna Besha of Lord Jagannath is undergoing at full speed 728 Views

Puri::11/11/20: Construction of attires for the much-awaited Nagarjuna Besha of Lord Jagannath is undergoing at full speed. Sculptors and artisans are preparing various weapons of the Lord including dagger, shield, and sword for the special avatar in the pilgrim city.“The initiation ceremony for the rare ritual of the Lords commenced from Dusshera and a 10-member team has been carrying out the works in full swing. The construction of Handia, Tati and the complete frame has been finished and about 30 percent works have been completed,” said servitor-cum-artisan Balaram Khuntia.

Basant Kumar Rana, the chief architecture of Nagarjuna Besa said, “Almost 50 percent of the frame has been completed. Thermocol, cloth, zari and bamboo sticks are being used to prepare the costumes. We are preparing handia along with Dhenu, Jaba, and Tati using bamboo sticks. Bandhamandir has been completed by 40 percent and apparel designs will be added during the new moon on Diwali along with other architectural works

.” Notably, Nagarjuna Besha of the Lords was last held in 1994. As per tradition, it is celebrated when the Panchuka (last five days of Kartika month) is observed as six days. This year, due to an extra month after Ashwin (Adhik Maas), the special besha of the Holy Trinity will be held on November 27, the extra day (sixth day of Panchuka).