Top Headlines
Home » National » Mo bus, the beloved city bus service of Capital Region has won the top award of the country for the second time

Mo bus, the beloved city bus service of Capital Region has won the top award of the country for the second time

in National, State News November 10, 2020 Comments Off on Mo bus, the beloved city bus service of Capital Region has won the top award of the country for the second time 313 Views

Bhubaneswar:10/11/20: Mo bus, the beloved city bus service of Capital Region has won the top award of the country for the second time in a row. The award was given by the Ministry of Housing and Urban Affairs (MoHUA), Govt. of India at a national level conference yesterday evening.

The 13th Urban Mobility India (UMI) Conference was held online on Monday. This conference is organised by the Ministry of Housing and Urban Affairs, Govt. of India every year. Last year the conference was held in Lucknow where Capital Region Urban Transport (CRUT) was given the first prize, “Best City Bus Service Project” in the new initiative category. Every year awards are given to top-performing City Bus Company in different categories. In Lucknow last year there were 12 awards in various categories.

This year there was only one category of award. The theme was ‘Innovations undertaken in Urban Transport during COVID-19’. After evaluating the majors taken by various bus companies across the country, the national jury decided to award the first prize- Award of Excellence to Capital Region Urban Transport, Odisha.

The awards were announced on Monday evening at the 13th UMI Conference. In an online programme Durga Shankar Mishra, Secretary, Ministry of Housing and Urban Affairs, Govt. of India gave away the awards. Arun Bothra, Managing Director, CRUT received the award. The programme was attended by senior officers of various City Bus Companies all over the country and senior officers of Govt. of India.

On this occasion Durga Shankar Mishra, Secretary, MoHUA and other delegates praised CRUT for its innovative methods to keep commuters safe from COVID-19. Later various bus companies of different states showed interest to learn from CRUT about these methods.

Speaking on the occasion, Arun Bothra said, “We are thrilled to receive the UMI award two times in a row.” He thanked the Govt. of India for this recognition and said, “This will motivate us to provide better services to the commuters while taking all precautions.”

Bothra said that the award to CRUT reflects the seriousness of Govt. of Odisha about COVID measures. He further added, “The COVID-19 measures taken by the state Govt. are considered one of the best in the country. We are happy that Mo Bus has lived up to the expectation of the Govt. as well as people of the Capital Region and enhanced the reputation of Odisha in terms of COVID management.” 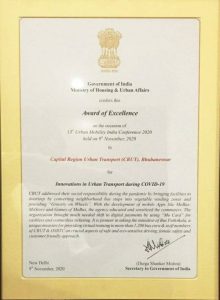 Dipti Mahapatro, General Manager, CRUT said, “Even when our regular service was suspended for daily commuters, we continued to serve the citizens. Mo Bus services were running so that emergency services could run. We are glad to contribute a little in the war against COVID-19 by providing dedicated bus service to emergency helpline & health workers. We gave support to Bhubaneswar Municipal Corporation in its endeavour to serve citizens of Bhubaneswar during this crisis. Mo Bus was used for delivery of essential items in the containment zones of the city.”

During lockdown, COVID-19 pandemic-induced social distancing pushed us to the confines of our home and Mo Bus service had to be suspended. “As a customer caring company, we thought of introducing Games of Mo Bus for our commuters to beat the lockdown blues. This was used as a tool to educate commuters about SMS (Social Distancing, usage of Mask & Sanitizers) and maintaining the relationship with customers,” said Mahapatro.

She added, “We intend to publish a book in future, ‘Mo Bus Mo Story’, first of its kind in the country, featuring experiences shared by commuters in the form of stories, poems, paintings and sketches.”

CRUT is continuing to provide essential service to keep the city moving by undertaking safety measures for its employees and commuters, the most significant one being 100 hours (5 weeks) of online training imparted to over 1200 crew through a program titled Bus Pathsala. Naveen Patnaik, Chief Minister of Odisha unveiled the book, ‘Bus Pathsala’ on the occasion of second anniversary of Mo Bus on 6th November. This compilation of virtual training sessions conducted during COVID pandemic on soft skills and technical skills is the first of its kind publication by any public transport company in the country.