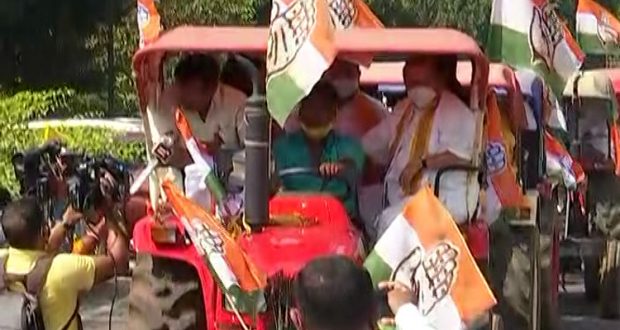 Bhubaneswar: 9/11/20: Odisha Pradesh Congress Committee (OPCC) on Monday kick-started ‘Kheti Bachao Yatra’ in the State protesting the Centre’s newly passed farm laws. A tractor rally was organised from Congress Bhawan in Bhubaneswar till Cuttack demanding immediate withdrawal of the newly enacted farm laws. The agitators were however stopped midway at Gopalpur area and not allowed to enter Cuttack as they had no permission from the administration. The agitation was carried out by hundreds of Congress workers under the leadership of Congress general secretary in-charge of Odisha Chellakumar and PCC president Niranjan Patnaik. Other senior leaders including Narasingha Mishra, Tara Bahinipati, and Sura Routray also took part in the agitation.

The objective of the rally is to educate the farmers about the ill-effects of the new legislation, Chella Kumar said.“To protest against the anti-farmer law, we have organised a tractor rally. Both the BJP and BJD are exploiting the innocent farmers and common people. The Congress will definitely explain and educate them on the negative impacts of the bill,” Chella Kumar said.

OPCC president Niranjan Patnaik said the demand of the Congress party is to immediately withdraw the new legislation for the greater interest of lakhs of farmers across the country.

2020-11-09
Editor in chief
Previous: Commissionerate Police announced special measures for the smooth conduct of Kali Puja in Cuttack.
Next: Odisha positive for Covid-19 rose to 302793 while the death toll has climbed to 1441.