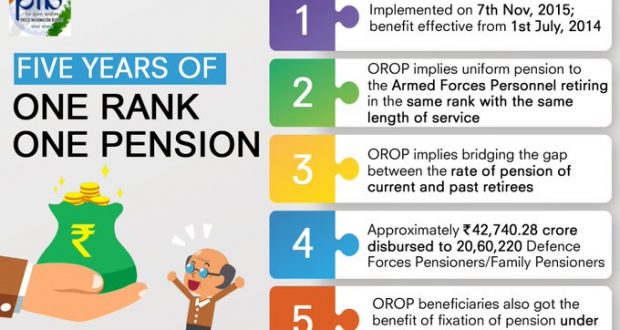 in National November 7, 2020 Comments Off on Five years of historic decision to implement OROP; Over Rs. 42740 Crore disbursed to 20,60,220 Defence Forces Pensioners 414 Views

New Delhi:7/11/20: The government of India took the historic decision to implement One Rank One Pension, OROPby issuing an order on 7.11.2015, benefits effective from 01.07.2014, despite huge financial burden demonstrating its commitment to the welfare of ex-servicemen. Armed Forces Personnel retired up to 30.06.2014 were covered under this Order.  Keeping in view the magnitude and complexity of Defence pension, extensive consultations were held with experts and ex-Servicemen before issuing of Government order on implementation of OROP.

Ex-Servicemen had been agitating for implementation of ROP for nearly for 45 years, but the same was not implemented before 2015.

OROP implies that uniform pension is paid to the Armed Forces Personnel retiring in the same rank with the same length of service regardless of their date of retirement.  Thus, OROP implies bridging the gap between the rate of pension of current and past retirees at periodic intervals.

OROP beneficiaries also got the benefit of fixation of pension under 7th CPC while calculating the pension by a multiplication factor of 2.57.

State-wise figures of the amount released on account of OROP arrears as on 11.10.2019areas under.