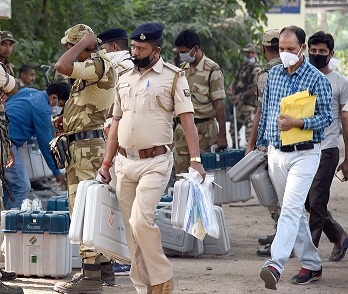 Distribution of EVMs and election materials to polling officials from one of the distribution centre set up for the Phase -II poll of the ongoing Bihar Assembly Election, in Bihar on November 02, 2020.

in National November 2, 2020 Comments Off on Elaborate security arrangements in place for 2nd Phase of Bihar Assembly Elections 302 Views

Bihar:2/11/20: In Bihar, elaborate security arrangements are in place for the Second Phase of State Assembly Elections.

In all, 94 constituencies spread over 17 districts including Patna, Vaishali, Sitamarhi, Darbhanga and Madhubani will go to polls in this phase tomorrow.

Over 2.86 crore voters will decide the political future of 1,463 candidates.

They include 146 women and 513 independent candidates and one transgender is also there in the fray.

Polling will begin from 7 a.m. and will continue till 6 p.m.

Election Commission has instructed to follow COVID protocol during the conduct of elections.

AIR correspondent reports that every person has been instructed to wear mask during election related activities.

Electorates have to wear mask during excercising their right of franchise.

Thermal scanning of all persons shall be carried out and sanitizers shall be made available at all locations during polling.

All polling booths have already been sanitized today.

In view of COVID situation, only 1,000 electors will excercise their right of franchise at each Polling Station instead of 1,500.

BJP is contesting on 46 seats, JD(U) 43 and Vikassheel Insaan Party (VIP) five seats in this phase.

While RJD is contesting 56 seats, Congress has fielded 24 candidates.

Elections are being held in three phases for 243-member Bihar Assembly. While the First Phase polling was held on 28th of October while voting in other two phases will be held on 3rd and 7th of November. Counting of votes will take place on 10th of November.