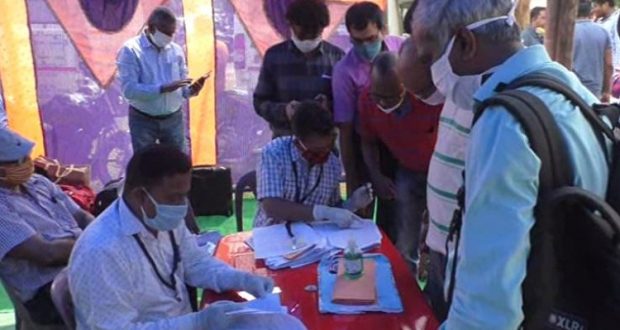 Security Beefed Up In Tirtol, Balasore for by-elections

in District Diary November 1, 2020 Comments Off on Security Beefed Up In Tirtol, Balasore for by-elections 374 Views

Balasore/Tirto:1/11/20: With the by-elections to Tirtol and Balasore Sadar Assembly constituencies just round the corner, tight security arrangements have been put in place by the administration to ensure smooth conduct of the elections.Informing about the security arrangement in Jagatsingpur, district Collector Saroj Mishra said, “155 out of total 373 polling booths have been identified as sensitive. Central forces will be deployed at 62 sensitive booths, micro observers at 40 booths while webcasting will be done at 37 booths. Besides, CCTV cameras will be installed at the remaining booths.”

“All the polling staff will leave for their respective polling station with required equipment today. All arrangements have been made so that no Covid-19 guideline is violated. The polling booths have been sanitised and voters will be provided with gloves and temperature will be checked to curb the further spread of the virus,” Mishra informed.

Similarly, in Balasore, the preparations have reached final leg at the 346 booths in the Assembly constituency. Thermal screening and sanitisation have been made compulsory for all the polling officials.

“All 346 booths have been divided into two groups. All Covid-19 protocols will be followed during the election. Moreover, the polling staff will be provided with a pair of gloves, mask and face shield,” Balasore collector K Sudarshan Chakravarthy said.

“The medical teams have carried out sanitisation work at both inside and outside of the polling station. ASHA workers and volunteers will be deployed at each polling station during the voting,” Chakravarthy informed.

2020-11-01
Editor in chief
Previous: CSK beat KXIP by 9 wickets in Abu Dhabi; Another match underway between KKR and RR in Dubai
Next: Puri administration launched a week-long programme under the ‘Mo Dham Mo Garba’